How Now Pink Cow?: The Origins of Red Cream Soda

One of the things you learn when you move to a different region of the country is that many things you took for granted as being part of The Way Things Are turn out to be only The Way Things Are In The Place That You're From. Like, I was in my mid-twenties when I discovered what people from Cincinnati usually call "gym shoes" are in the rest of America called "tennis shoes" or "sneakers." Or, for example, my wife is really fascinated by how folks here in New England don't eat as many Jell-O-based foods as we do in the Midwest. Some regionalisms become points of cultural pride (we Cincinnatians love to talk about our distinctive chili, of course), but I suspect many more pass unnoticed because you never think about them until they're gone.

Something I only realized in the past couple years is that red cream soda is a regionalism. In Ohio, Barq's doesn't just sell root beer, but also "red creme soda." And Big Red was a staple of my high school years visits to White Castle. (There are other red cream sodas, apparently, but those are the big two for me, anyway.) Red cream soda ostensibly has nothing to do with any red fruit flavors, unlike some other red pops (like the strawberry-flavored Cherikee Red of Scranton, Pennsylvania). Information seems to be scant, but a Texas Monthly article on Big Red claims that despite its (infamous) bubblegum flavor, "the flavor is actually a combination of lemon and orange oils, topped off by a dollop of pure vanilla for a creamy aftertaste." And what we know about the origin of Barq's Red Creme Soda would also seem to indicate it contains neither bubblegum nor fruit, though I don't think it tastes like non-red cream soda.

But red cream soda is not a thing you can buy here in New England. Discovering this sent me on two quests: one, to bring some red cream soda back to New England with me, and two, to discover the origin of this regional foodway.

(My research largely consisted of Googling, so you're going to get what you pay for here. Maybe an more in-depth investigation awaits in my future. See below for sources.) 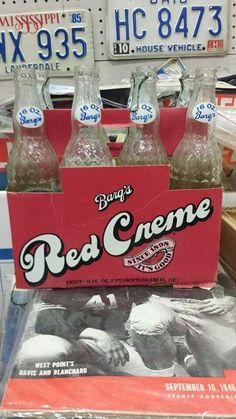 As far as my second quest goes, I learned Barq's is one of the oldest root beers in America, though not the oldest, and for a long time it didn't even call itself a "root beer," because a competing company had the term trademarked. (Later, the federal government banned caffeine in root beer, so Barq's removed "root beer" from its name again. You can read all sorts of fascinating things about the history of Barq's at the blog of Todd Nelson, most of which isn't relevant to my purposes here.) Edward Charles Edmond Barq, who had won a gold medal for his orange soda at the Chicago World's Fair in 1893, started out in New Orleans, but by 1897 was set up in Biloxi, Mississippi.

Barq's biological son eventually took over his business, but Barq also had an adopted son, and Barq sold or gave him a production facility back in New Orleans. The adoptive son, Jesse Robinson, ended up with his own Barq's company, which had exclusive rights to the Barq's name and formula in all of Louisiana.

Most of what you can find about the history of Barq's focuses on the root beer, but eventually I discovered the origin of their red creme soda, and it shows that red cream soda has even closer ties to Cincinnati than I thought. According to the Cincinnati Enquirer, in 1937, three men from Cincinnati purchased a Barq's franchise and begin bottling root beer and creme soda locally. It was one of these men, Richard Tuttle, who had the idea to add red color to Barq's previously amber-colored creme soda. The resulting red creme soda was so popular that the parent company back in Biloxi adopted the same change. (Tuttle experimented with a bunch of other colors, too, but I guess red was the only one that lasted.) The New Orleans Barq's company adopted it, too, where the pop went under the name of just "Barq's Red Drink." 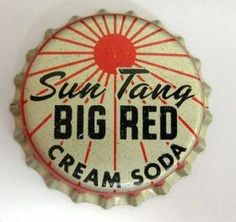 Big Red, which started in Waco, Texas, claims to be the original red cream soda, however, beginning life in 1937 (the same year Tuttle started his franchise), as the Sun Tang Red Cream Soda, before becoming Sun Tang Big Red Cream Soda, and then just Big Red. Supposedly the name changes came about because one of the company execs heard his golf caddies calling it "Big Red"; read here for the whole story. Though in high school we would always get four Big Reds and a Crave Case at White Castle, I find that Barq's Red Creme Soda has more of my allegiance-- perhaps I was subconsciously picking up on its Cincinnati origins?

John Ruch claims Big Red started life as "Big Green," but red turned out to be the more popular color-- but I can't find any mention of that on the Internet except at his blog. He also claims that red cream soda is actually not a cream soda; the designation is just used to make the suspiciously fruit free "red pop" have some kind of legitimacy.

I also learned that in Canada, almost all cream soda is red cream soda, to the extent that "cream soda" is understood to be red by default. Not sure how that ties in to everything else here.

I can conclude on something I do know for sure, having also achieved the goal of my first quest. If you have red cream soda, you can make a "pink cow," which is just a root beer float (i.e., a "brown cow") but with red cream soda. 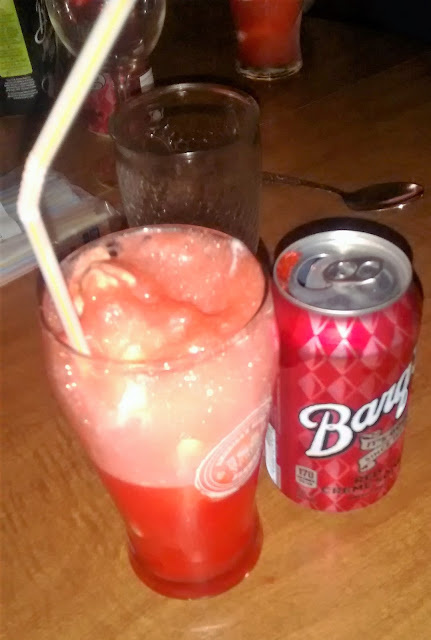 This is the one I made myself Tuesday night. It was definitely delicious.