Well, if you can't get a tenured professor, why not just hire the next guy to break into your headquarters?

My wife and I must be watching tv unusually briskly, because it's been less than a month since we finished series 2 of Primeval, and we're already done with series 3. 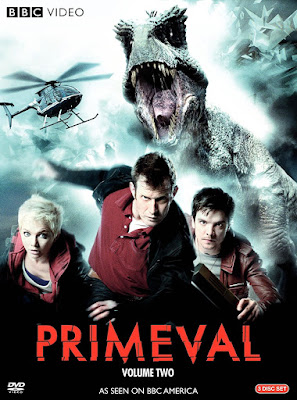 You know how television programmes go off the rails sometimes? Just, like, they totally abandon what kind of sense underpinned them? Series 3 of Primeval is like that. You may recall that it's about a crack team of evolutionary biologists hunting temporally displaced animals. Well, one of those biologists (Steve the Sexy Postdoc) died at the end of series 2. Another one (the professor and team leader) dies in episode 3. This leaves just Connor and Abby as the biology experts on the team-- and Connor, I should point out, has suffered the kind of character drift that takes someone from "knows a lot about dinosaurs and Star Trek" to "knows how to hack things and build incredibly complicated technological devices." I mean, he looks geeky, obviously he can do anything the plot requires.

There's a whole sequence of tumultuous cast changes during the series. At the beginning of series 3, Captain Hilary Becker debuts, replacing Steve the Sexy Postdoc as the Sexy Man of Action. Only I could never even remember his name, so nondescript is his character, and generally just called him "Captain Sexy." They make a joke in episode 10 about how he's obsessed with guns and nothing else-- and the joke doesn't land at all because his characterization doesn't even rise to the level of "obsessed with guns and nothing else," as mostly he just stands there.

Danny Quinn first appears in episode 2 of series 3 as a policeman who doesn't play by the rules-- he then forces his way into the team's adventure in episode 4 and ends up becoming the new team leader. Look, I know Primeval was never a sophisticated television show to begin with, but it's completely impossible for me to take seriously. Like, this guy's only credential is that he's a stereotypical television cop, and you're just like, "sure, this guy's suitable for replacing a professor of evolutionary biology as the head of our crack animal-hunting team." In his second episode, he steals a helicopter and fights a Gigantosaurus rex with it. And he's hired! I can't say I ever really warmed to Danny.

At the end of series 1, Primeval did something genuinely clever: because of a timeline change, Claudia Brown was erased from history and replaced by a new character, Jenny Lewis, played by the same actress. The characters were intended to contrast, I think: Claudia was a mild-mannered civil servant, warm and supportive, while Jenny was a sparky P.R. specialist focused on glamour and with a disdainful attitude toward the team's scientists. Unfortunately, Lucy Brown is, I suspect, just too dang nice, and it never comes off quite like it should, no matter how many times they dress her up in power heels and pencil skirts. By series 3, they seem to have given up on the Claudia/Jenny differences completely, as Lucy Brown is just basically playing the same nice character she played in series 1. Additionally, her role as the team's interface with the lay world seems to have been completely forgotten-- she's just another character. She leaves in episode 5 in any case: the third main character departure in six episodes, meaning the show is down 50% of its original cast.

There's one more new character this season: episode 1 introduces Sarah Page, an Egyptologist who is brought onto the team to help them identify anomaly openings in the historical record. She promptly spends five episodes staying at the base contributing nothing at all, and only one of the ten episodes makes any use of her historical abilities (an almost decent episode where a medieval knight comes through to the present day). I really don't get the point of her character, as she builds almost no rapport with the other team members until the last couple episodes. It's like the writers added her to the team and then forgot about her. Partially I think this is because of the death of Nick: Nick spends the first two episodes of the series obsessing over this time map he's creating with her help, but it's destroyed when he dies. I feel like something was being set up there that was derailed by the unexpected departure of the actor who plays Nick.

The post-Nick team never really clicked for me, and series 3's background plot is terrible. It partially rehashes series 2's, in that the team is up against a conspiracy led by an evil civil servant, but her goals make no sense, and seemingly significant actions have no consequences. In one episode, she actually takes over the ARC, abusing her authority... at the end of the episode, everyone just takes their old jobs back! Like, she ordered them killed on a flimsy pretext, and everyone laughs it off and goes back to work. Long-running villain Helen Cutter completes her descent into irrelevance as well. Early in series 1 she seemed to be working to some kind of mysterious agenda not necessarily contrary to Our Heroes'; by series 3, she just does random shit that's evil (including building a clone army!?).

My wife pointed out that while series 1 and 2 had a succession of exotic locations, series 3 seems to have a succession of interesting vehicles: we have a racecar episode, a dirtbike episode, a helicopter/airport baggage train episode.

I guess what I'm saying here is that the third series was not very good. I mean, how many times does their impregnable top-secret facility get broken into?
Posted by Steve at 8:30 AM