"Beckons you to enter his web of sin but don't go in": Goldfinger 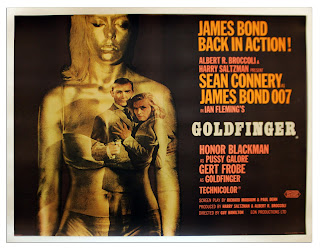 The early James Bond films are pretty faithful to the books upon which they were based, whereas many of the later ones are only very loosely inspired by their novels. (In what I've watched so far, for example, Dr. No and From Russia with Love are relatively straight, whereas Live and Let Die is pretty loose, and Moonraker is of course just effing nuts.) Of the more accurate adaptations, the changes are usually to the benefit of the film as a film: both Dr. No and From Russia add content that heightens the sense of threat and streamlines the plot.

But Goldfinger is in a weird sort of uncanny valley: enough like the book that the differences are just flat-out perplexing at times. Most prominent is that in the novel, Goldfinger brings together all of the American crime lords to help him in his plan, as he needs their manpower to load the gold from Fort Knox. In the film, Bond cheekily points out that the maths of that plan don't add up, as it would take days to load up that much gold. But the crime lords still turn up... and Goldfinger kills them all, including the ones who seemed like they were going along with his plan. Why? I don't know. It pushes belief that these guys would come unaccompanied and be killed so easy (fun though the death-by-car-compcator is), and Goldfinger doesn't actually need their resources for anything, as he takes down Fort Knox with about a dozen Chinese men. Is he just too cheap to pay them for services rendered? Why built the elaborate Fort Knox model for the benefit of a bunch of guys he's going to kill?

On the other hand, some changes work in the film's favor, like Goldfinger keeping Bond along because Bond's presence keeps MI6 or the CIA from making a move. (That said, Felix Leiter is kind of an indulgent old man in this one, who smirks at all of James Bond's sex hijinks, and he get fooled by some pretty pathetic tricks. He's not exactly convincing as Bond's American equal.) Also the film kills Tilly off earlier, which given the distasteful way Fleming kills her off in the novel, is a good call. I'm undecided if robbing Fort Knox or nuking Fort Knox is the better villain plot. The latter has a certain maniacal joy to it, but the former seems more in-character for the avaricious Auric Goldfinger.


Sean Connery is, of course, effortless, and this is definitely him at the peak of his powers. The pre-titles sequence has a great bit where after destroying some kind of villain compound (I didn't really pick up what this was), he goes to have sex with a woman... only to see an assassin charging him reflected in her eyes! He knocks out the woman and electrocutes the assassin in pretty brutal fashion. Casual sex and casual violence: that's the coolness of James Bond. His interplay with Tilly-- unwooed by his charms-- was also quite good I thought. He's just so goddamn smug. It's not quite what Fleming is doing with Bond in the novels (Daniel Craig comes the closest to that, I think), but it's magnetic and captivating.


The prominent "Bond girl" in this one is Honor Blackman as Pussy Galore: the film at least has the good sense to signpost that her name is horrific with Bond's exclamation that he must be dreaming upon hearing it. I primarily know Honor Blackman from her role in parts nine through twelve of Doctor Who: The Trial of a Time Lord, which was over twenty years after this. Like all the better Bond girls, she convinces as having her own life and competencies, but she's also flirtatious and sexual as needed-- the scene where Bond seduces Pussy in a barn is a bit ridiculous, but the chemistry of the two makes it work. (What a sudden face-heel turn, though!)


When we finished this movie, my wife declared it was stupid. On the other hand, I know a lot of people put it in the top tier of Bond films, and it's easy to see how it provided the template for so many of the ones that came after it. For me, it's solidly middle-of-the-road. Mostly fun, more grounded than some of the later films, with some nice humor, but sometimes a little too goofy for its own good (like with Felix's incompetence, or the climactic bit on the airplane).