Calling Me Home by Julie Kibler
I read this as part of my ongoing project to read more books set in my hometown of Cincinnati. Calling Me Home alternates between two first-person narratives, one in the late 1930s in northern Kentucky (a fictional town outside Newport, which is right across the river from Cincinnati) about a white girl in love with a black man, and one in the present day in Texas, where that white girl (now grown up) is accompanied by her black hairdresser on a cross-country drive back to Cincinnati for a funeral.

It's okay. The present-day narrative is pretty boring, to be honest, as the hairdresser encounters racial microagressions and experiences some stereotypical drama with her teenage son and frets over her own romance. The past narrative was better, and really came alive for me at a couple key points, one of them being a short-lived reunification that the girl has with her black lover-- I really felt their desperation and their hunger. There are a couple twists, one of which is incredibly obvious (yet many reviewers on LibraryThing expressed surprise at it), but worked for me emotionally anyway.

There was the occasional slip-up. I don't think Kibler is very good at capturing the nuances of racism: her racist characters are all ridiculously evil people, while all of the nice characters are secretly not racist. Probably the worst part of the whole book was that the hairdresser learns a moral lesson from the flashback narrative that sounds like it came from a greeting card. Like, you just heard this tragic tale of racism, and that's what you take away from it?

Bonus Nitpick: As a Cincinnatian, I was happy to see a little bit of local color, like the street car, the incline, and chili parlors. But there was a pretty big research fail when a coney is described as a plain hot dog: 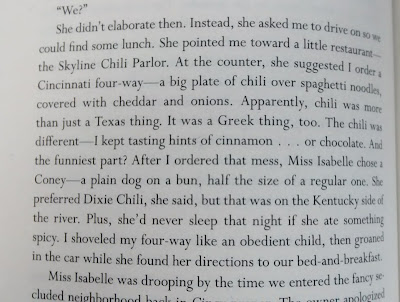 A coney has chili on it, c'mon! Kibler has obviously not ever eaten one (some Cincinnati chili recipes do include cocoa powder, but there's no way you would taste hints of chocolate), but at least she could have looked at a menu.
Posted by Steve at 8:30 AM