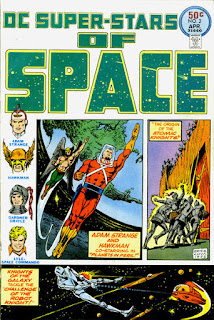 My recent reading of all sorts of DC space comics has taken me to the 1970s DC Comics anthology DC Super-Stars. This ran from March 1976 to January/February 1978, and mixed issues of new material with reprints, in an oversize format (issues were around fifty pages). Four issues in the run had the cover title of "DC Super-Stars OF SPACE," and reprinted material from DC's Silver Age space comics.

The main feature across all four issues was Adam Strange, the man of two worlds. Adam Strange is a human archaeologist who travels to Rann in the Alpha Centauri system by being in the right place at the right time to be hit by zeta beams, which transport him across space. On Rann, he fights evil and romances the beautiful Alanna, but once the zeta radiation in his body dissipates, he returns to Earth, meaning he can never make a home or a family on this distant world. I've read some of the modern takes on Adam, and I own the Adam Strange Silver Age Omnibus, but I haven't gotten around to reading it, so this was my first real exposure to the original adventures of Adam and Alanna. 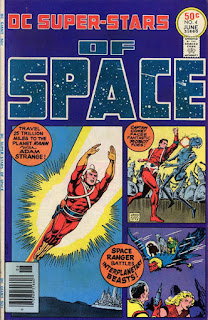 I enjoyed reading them a lot, more than I anticipated, which I guess bodes well for my eventual reading of the Silver Age omnibus. They're kind of dopey in the typical Silver Age way at times (one has a bad guy threatening Rann with monuments stolen from Earth, including a lake?), but Gardner Fox clearly read a science textbook at some point, and even though the science is fanciful, using concepts like the Roche limit makes it feel "real" in a way Superman's science does not.

The basic set-up of Adam Strange also has a pathos that puts it above other stories of its era: Adam has found his place, but he can never keep it, and even in just these four stories, Fox provides permutations on it so it never gets stale. Alanna is pretty awesome, too: she's not an equal co-star with Adam, but she is smart and cool, and works to get herself out of trouble as often as Adam does. These were fun, and I look forward to rereading them (with better printing) and reading the others. 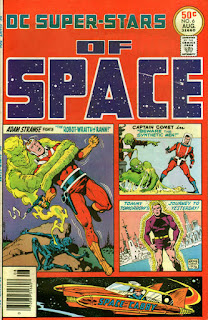 Other features (most just appearing once) included: 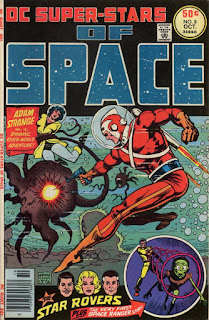 There are some other nice touches, like an in-character letter from Captain Comet in issue #2 (actually by assistant editor Jack C. Harris). The editorial in issue #8 includes promises about what will come in the next issue, #10, but #8 was actually the last DC Super-Stars of Space installment, as the alternating plan went away, and #10 was actually "Strange Sports Stories." Finally in issue #16, we got another science fiction story with the first installment of Star Hunters, but as that launched a series of its own, I'll cover it in another post.

DC Super-Stars of Space appeared in issues #2, 4, 6, and 8 of DC Super-Stars (Apr.-Oct. 1976). The original stories were published in various comics from 1951 to 1964, and were written by Gardner Fox, John Broome, Bob Kanigher, and Otto Binder; penciled by Carmine Infantino, Murphy Anderson, Jim Mooney, Bernard Sachs, Bob Brown, and Sid Greene; and inked by Murphy Anderson, Joe Giella, Jim Mooney, Sid Greene, Bernard Sachs, and Bob Brown. The reprints were edited by E. Nelson Bridwell.
Posted by Steve at 8:30 AM