I literally had two pieces of writing come out in two days this week, even though I completed both of them back in 2017 at completely different times.

One is a peer-reviewed article in the Wilkie Collins Journal, part of a special issue called "The Heart and Science of Wilkie Collins and his Contemporaries." My contribution is about Wilkie Collins's novel Heart and Science: A Story of the Present Time (1882-83). The novel's big but previously largely unheralded claim to fame (or so I assert) is that its main antagonist is the first female scientist in British literature.

I'm very happy with this article. It has its roots in a seminar paper I wrote in a Philosophy of Science graduate seminar back in 2011; this was revised to fit into my dissertation at some point, and then last summer, revised to come back out of it. I thought it would be an easy gig, but I basically had to rewrite the whole piece from the ground up to make it work. (One of my dissertation committee wrote a comment on that section of my diss that they found it unconvincing; I remember bristling at the time, but when I reread it last summer, I realized I agreed.) But I'm glad I did, as it's a much stronger piece, and hopefully I can fold it back into the book project, now a piece with a much clearer argument and a much more compelling interpretation of the novel.

The article is called "The Female Amateur Science and the Sense for Conduct in Heart and Science: Blind to Matter and Morals," but the most recent issue of the Wilkie Collins Journal is always password restricted to members of the Wilkie Collins Society, so you'll have to wait until another one is out to read it if you're not a member. 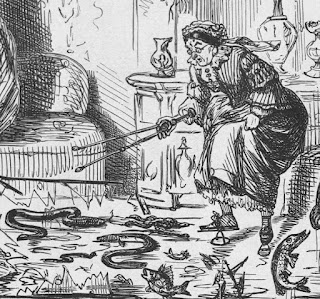 Here's the first two paragraphs, though:


The real nineteenth century was replete with women of science. From Mary Anning, the legendary fossil finder, to Hertha Marks Ayrton, the suffragist and electrical engineer, the role of women in the actual science of nineteenth-century Britain was substantial, and it has been well chronicled by many. However, fictional women of science are much thinner on the ground. While the man of science recurred through the novels of writers such as Charles Kingsley, Elizabeth Gaskell, and Thomas Hardy from the 1850s onward, it was not until the 1890s that the literary woman of science made much of a mark, and then she was almost always a villain. The least evil of them is probably the amateur geologist Grace Waring in Kathleen ‘Iota’ Mannington Caffyn’s 1894 novel A Yellow Aster. Grace is one half of a science-obsessed married couple more interested in geology than parenting, and her emotional negligence causes her daughter to grow up incapable of love. Most of the women of science in 1890s literature were villains in scientific romances: George Griffith’s Olga Romanoff, or The Syren of the Skies (1895), T. Mullett Ellis’s Zalma (1896), and L. T. Meade’s The Brotherhood of the Seven Kings (1898) all have female terrorists with scientific training for antagonists. Susan Hroneck suggests that these novels ‘lack the means to conceptualize the woman scientist […] [T]he woman scientist is not linked with science’s fantastic future, but instead the villainous women of history and myth’ (par. 2). It is not until 1909, in H. G. Wells’s Ann Veronica, that there is a non-villainous female scientist character of significance.

The earliest fictional woman of science is Mrs. Maria Gallilee in Wilkie Collins’s Heart and Science: A Story of the Present Time (1882–83). Mrs. Gallilee is a self-educated scientific amateur, and an active participant in the scientific social scene of the 1880s. She is capable of performing dissections, and is well-versed on a range of scientific topics, from dinosaur dung to atmospheric explosions, from the theory of acoustics to protoplasm and the origins of life. Within the London scientific community, she is regarded highly both for her scientific opinions and her well-appointed scientific soirees. Much of the critical discussion of science in Heart and Science tends to focus on the novel’s vivisectionist, Dr. Nathan Benjulia—perhaps naturally, since Collins wrote the novel for the express purpose of condemning vivisection. Critics primarily discuss the novel’s female characters as Benjulia’s (potential) victims. But Benjulia usually lurks at the margins of the novel, while Mrs. Gallilee is its primary villain: its main plot, after all, is about Mrs. Gallilee’s attempts to obtain the inheritance of her niece, Miss Carmina Graywell, in order to help pay off her own debts.

I've previously explored some of the thinking that led to the article in posts on this blog:
I'll possibly write more about the writing process on this one at some point, as I think I learned something from doing it. It's probably the most comprehensive revision I've ever done of a piece of academic writing!

One day later, I received word that The Companion to Victorian Popular Fiction was out. My contribution to this was much smaller; the book has 300+ entries on various aspects of Victorian popular fiction, and I wrote the one on George Griffith, who wrote a number of a future-war novels featuring both air-ships and sexy women with untold destructive capacity in the 1890s and 1900s. It's about half a page, but I think it came out nice. I use the space to sum up Griffith, but also kind of try to push for a bigger significance for him in the development of early science fiction. We'll see if anyone cares. (Weirdly, I'm sharing space with someone I knew from the Star Trek books bulletin boards of the 2000s, but now we're both Victorianists.)
Posted by Steve at 8:30 AM