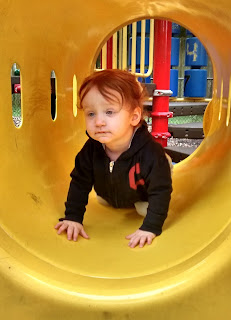 For many years I ran a strictly disciplined daily schedule here at Science's Less Accurate Grandmother. A few months ago, I allowed myself to miss a Friday-- and as I should have predicted, that opened the floodgates. Once I allowed one exception to my self-imposed rules, then I was making exception upon exception. Today is the first Friday I've made a post on since 18 October, over a month ago!

Such, one supposes, is parenthood. I think the second year is proving to be easier in some ways, but more time-consuming in others. I feel like I can actually communicate with him now, so meeting his needs is easier--but now he seems to have so many more needs! Recently he learned the word "up!", so he is always telling me and Hayley what to do with him. "Up!" can mean "I want to be on the couch" or "Nurse me" or "Put me in a cardboard box" or "I need help with this step" or "I want to be carried" or "Get me out of this high chair."

I also think-- maybe Hayley would disagree-- that we are more equitable about splitting childcare duties. The older he gets, the more they can be split equitably. (Or maybe I'm kidding myself, and they always could have been split evenly, and now I actually do it more. Or maybe I still don't do it! There's certainly not much I can contribute to that late-night nursing.) He's less directly dependent on mom for reassurance and care, and more willing to play for long periods with daddy. (Though there are still times only momma will do.) But this means my me-time on the weekends has to be spent lesson planning and grading and preventing the house from sinking into total ruin, not stockpiling blog entries or reviewing audio dramas. 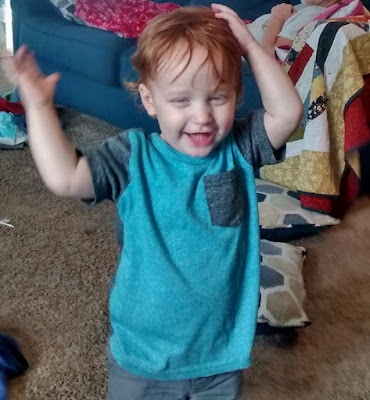 It's been a taxing couple months outside of work and parenting, too. Hayley got into a car crash; she was fine, the car is basically fine, but needs some work, and co-ordinating with the other guy's insurance (he was at fault) has dragged on and on. Our credit card was cloned, and someone ran up $800 at local restaurants before we realized, and that has dragged on and on too. Our hot water heater was full of dirt, and resisting my many attempts to clean it, sending little black specks into our tub. That one my father helped me finally lick, several months after the first occurrence. One day, I woke up and discovered our pool had gone down several inches overnight. That, at least, I was able to quickly diagnose and fix. (The pressure relief valve on the pump had cracked.) Our cat Oracle has turned out to have hyperthyroidism, so that's yet another thing, but at least we know why she's been vomiting so much, and hopefully that can be rectified now.

Because, you know, I will finally be able to get a lot of work done.
Posted by Steve at 8:30 AM