The Absolute Authority
Writer: Warren Ellis
Penciler: Bryan Hitch
Inker: Paul Neary
Colorist: Laura DePuy
Letterers: Bill O'Neil, Ryan Cline, Ali Fuchs, Robbie Robbins
Additional Colors: David Baron
Additional Inks: Andrew Currie
The title of The Absolute Authority is a fortunate congruence: this is simply the "Absolute Edition" of a series called The Authority, but unlike the case of, say, Absolute Green Lantern: Rebirth or even The Absolute Watchmen, the title actually has a meaning apart from that. The Authority is about a group of superheroes who have set themselves up as Earth's utmost authority, since that's the best way that it can be protected.

It's fascinating in the way that it chooses to depict utopian violence. Peter Paik, as I've said many times, argues that you can't get a utopia without violence. What then interests me is the way that utopian stories elide violence to make the utopia more palatable. Superhero comics were originally utopian, and the original Siegel and Shuster Superman stories solved this problem by simply being very cartoony. Superman is making the world a better place by putting arms lobbyists in war zones, trapping corrupt mine owners in dangerous mines, smashing used car lots, and destroying entire neighborhoods, but somehow no one ever gets hurt. This isn't a gritty, realistic world, so you believe it. Watchmen moves Superman's fantasy violence into a gritty, realistic world, and shows you the consequences of one man using his power to shape the world: mass death. But possibly also world peace? Moore's depiction is surprisingly nuanced, in that I think it's completely impossible to see who in the story he agrees with (if anyone).

The Authority continues the tradition of these earlier texts, but weirdly merges the optimism of the 1930s Superman stuff with the realism of Watchmen. Which is to say that this is a comic book about people who do very violent things to make the world "a better place" but the narrative seems to be endorsing their perspective entirely. Some folks argue that the comic wants you to take the Authority as the actual villains, but if so, it's pretty subtle, which perhaps makes the whole thing more clever. But regardless, at its best, The Authority is a very intriguing depiction of utopian violence.

The first story is "The Circle." Grant Morrison likes to talk about how this story's opening was a big deal, about how it made him sit up and pay attention to superhero comics again. (He says this in both this book's foreword and Supergods.) I don't know about that. Maybe I just have the benefit of another 13 years, but it's all pretty normal stuff: bad buys destroying a city, the civil authorities having no idea what to do, a villain who's a pretty terrible racist caricature. The Authority doesn't show up in time to save Moscow, but they do intervene in London during the Gamorran terrorists' second attack. There's a lot of violence; what makes it noteworthy is how fun the comic makes it. One of the characters, Jack Hawksmoor, says at one point, "I've been waiting to punch someone in the brains all goddamn day." And then he does just that. (Though he does it a couple pages earlier because the narrative is out of sequence.)

Eventually, the Authority beats the Gamorran terrorists to the punch, and they're waiting for them when they attack Los Angeles. But not only do they defeat the hundred of clone warriors flying into Los Angeles, one of the Authority (the Batman analogue "Midnighter") plows a spaceship through the capital city of the Gamorra Island to wipe out their base of operations, grinning while he says, "I love being me." Between Los Angeles and Gamorra, I am certain that millions lie dead at the end of the story.

One of the Authority, Swift (who we are told used to be a pacifist, only "it's just not a good enough world that you can work for it without hurting people badly") asks at the story's end, "How many people you think we killed?" Jack Hawksmoor replies, "How many people would've died if we hadn't been here? It's not a great answer, I know; but it's the best answer there is. We saved more people than we killed." There's something jarring but sort of energizing about a superhero comic that's willing to be so blasé about death. Millions just died, and hey, you should just roll with it. The utopian stuff comes in pretty explicitly on the next page, when Jenny Sparks, the leader of the Authority, points out that with what the United Nations captures from Gamorra, they'll have the capability of performing mass cloning and the key to instantaneous mass transit. Plus the UN will know that the Authority knows they have it, so they'll be sure to use it for good-- or else. Through the threat of violent action, "the world will be a better place." Awesome!, right? 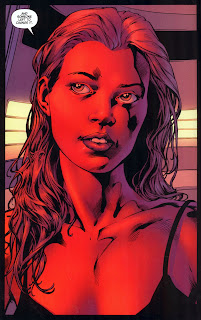 This right here is the single best page of The Authority. It's the last page of chapter two of "The Circle." The issue doesn't end on a bad guy threat or an attack. It ends on a character-- our protagonist-- declaring that "there had to someone left to save the world. And someone left to change it." Jenny Sparks isn't the first superhero to say something like this, but usually when one does, they're going evil. Think of Superman in Red Son ("I could take care of everyone's problems if I ran this place and, to tell you the truth, there's no good reason why I shouldn't"), or maybe Hal Jordan when Coast City is destroyed. When they say things like that, it means they're going bad. The imagery shows them as deranged, mad. But here, we see a beautiful image of a wistful Jenny Sparks looking out a window, the light of the multiverse playing off her face, as she declares her intention to change the way people live. And that's it-- end issue. What an idea! Not to mention, what great art, from Bryan Hitch's pencils and Paul Neary's inks down to Laura DePuy's consistently amazing colors.
The rest of The Absolute Authority is not as good as "The Circle." Or rather, it's just as good, but that's a problem; the stories keep on doing the same thing again and again. These are "widescreen" "decompressed" comics, which would be fine if something happened. The second story, "Shiftships," has Earth attacked by people from an alternate reality, but the first three of its four chapters are taken by information gathering. Information gathering that's ultimately pointless, as the Authority just bombs the crap out of the other world.

The story gets interesting right then, as Jenny Sparks tells its inhabitants:


Albion is free of the Blue. Sicily and the Italian capital infrastructure are gone. If needed, we can annihilate the Hanseatic regions within the hour. If we're asked to, we will go into China and Japan. If we have to, we will personally expunge the royal blood and military rape culture from the face of the planet. We're here to give you a second chance. Make a world worth living in. We are the Authority. Behave.

Then, when the Engineer expresses reservation about what they've done (and I would argue that this is actually an authorizing move for a writer), Jenny Sparks says, "Maybe we just did what we said we would, all along. Changing things for the better. One Earth down, one to go." Oh, now this is getting interesting!

Wait, the story's over? That's where "Shiftships" comes to an end; all the ideas raised by that ending go entirely unexplored. How would they actually enforce their control over this world? Why don't they do this to their ("our") world? In his foreword, Morrison claims that The Authority is more realistic than other superhero stories, but it's making the same elision of violence that the original Superman made. The massive, violent change happens on a world we'll never see again, so there's no real consequences. 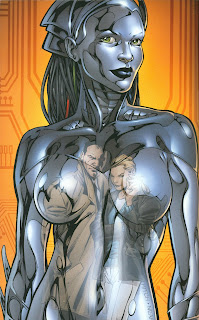 The last story, "Outer Dark," is maybe entertaining in a comic book kind of way-- the Earth is attacked by globs of stuff that actually lived there first and want it back-- and moves faster than the previous stories, but is otherwise unimpressive. There is an interesting bit where we see Jenny Sparks's all-guns-blazing approach to reform be overridden, but that's about it.

The Authority has the temerity to raise more interesting problems than it's capable of dealing with. I don't want it to be dark and Watchmen-type serious, but on the other hand, it doesn't have to be as splashy and inconsequential as it sometimes is. There's good writing, good art, and good colors here, but they're not always being harnessed to something that actually needs their potential level of power.
Posted by Steve at 8:30 AM