It's Like Homeward Bound, but with More Blood and More Cyborgs

We3: The Deluxe Edition
Writer: Grant Morrison
Artist: Frank Quitely
Colorist and Digital Inker: Jamie Grant
Letterer: Todd Klein
We3 is an odd little comic. It's about a government project to abduct three pets (a dog, a cat, and a rabbit) and wire them into killing machines so you can have a living soldier on the battlefield without it being a human being.  The project gets shut down, and the scientist ordered to terminate the animals actually releases them, forcing the government to come after them, all guns blazing. 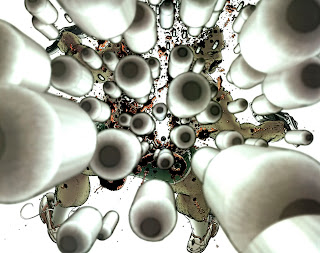 There are some great things about this book.  Most of that is due to Frank Quitely's art.  The absolute best page is where we see a man being torn apart by a hail of bullets, and we are positioned on the opposite side of his body from the shooter, all the bullets coming right at us after having passed through him.  It is the most beautiful image of a man being torn apart by bullets that I have ever seen.  Indeed, the whole book is filled with oddly beautiful images of violence, which cause you to reevaluate what you think of violence more than any number of gruesome images ever will.  In fact, the beautiful images that are not overtly violent are still only possible because of violence, such as the three animals' star-filled escape.  Sure, it's gorgeous, and sure, it's a two-page splash emerging from a cramped grid of panels-- but a page earlier those animals murdered a bunch of people.

The notes at the end by Morrison and Quitely indicate that they think they're doing something innovative, and I don't fully buy it, but they're almost there.  At first I rejected the tiny inset panels, though a great technique unique to comics, as having been done by Crisis on Infinite Earths back in 1985 (and though I like George Pérez, he's not exactly avant garde), but I realized that these are different. While Pérez's images show a number of moments all happening simultaneously to each other, Quitely juxtaposes multiple moments that don't actually take place simultaneously, but come on top of each other so quickly that they seem to. But I can't come up with an effect caused by the 3D panels that comics couldn't do before already.

The story itself is kinda obvious-- it really is any old "escaped animal" story but with violence and cyborgs.   The characters are mostly types, especially the human beings (but maybe that's the point).  We3 is formalistically complex, but not married to a story that makes full use of that complexity.
Posted by Steve at 8:30 AM