It's Been a Kingsley Kind of Week 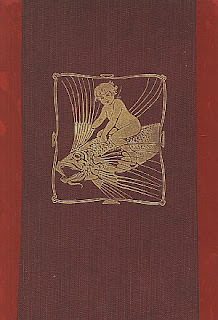 I get the man on the brain, I guess. This Wednesday, I was teaching Walter Ong's "Orality and Literacy" (among other pieces on the difference between oral and written language) in my book history course, and I wanted to read something aloud to my students, then get them to read the same passage, so we could talk about the differences. I meant to grab a Calvino collection on my way out the door, but I forgot, so I was limited to whatever I could find on my office bookshelf. Eventually I settled on The Water-Babies, remembering its great passage about how no one seeing a water-baby is not the same as water-babies not existing. It culminates with


Did not learned men, too, hold, till within the last twenty-five years, that a flying dragon was an impossible monster? And do we not now know that there are hundreds of them found fossil up and down the world? People call them Pterodactyles: but that is only because they are ashamed to call them flying dragons, after denying so long that flying dragons could exist.

The Water-Babies is meant to be a bedtime story of sorts, so it's written in a storytelling style, including (in this passage) objections from the listener:

I had forgotten that until I selected the section, but it worked well with Ong's point that much written communication mimics the style of oral communication. (He uses some of Aquinas's theology as an example, so this was a little less heady.)

And of course I like this book, it has Owen and Huxley jokes.

That morning, I had been cleaning up a dissertation chapter that includes a discussion of Kingsley's Two Years Ago, though I hadn't actually gotten to that part of it yet, but I guess I had him on the brain, though I didn't make that connection until Thursday. Thursday I actually did work on the Kingsley part of the chapter, and one of the larger changes I made (aside from deleting, because I sort of belabor my points in this chapter) was to replace where I had cited someone else's take on The Water-Babies with my own analysis of a little story: in this case, the tale of Professor Ptthmllnsprts, who cannot see a water-baby even when it is right in front of him because he thinks like a materialist man of science, and does not allow mythology to influence him. In revenge, a fairy curses him to believe in everything, including that the moon is made of cheese, and his scientific career ends in embarrasment.

Ptthmllnsprts (whose name is now added to my spell-check but I can now spell without checking) is probably based on Huxley. Owen claimed humans were distinguished from apes by the hippocampus minor, but Huxley demonstrated that apes also has hippocampus majors. In The Water-Babies, Ptthmllnsprts's big claim to fame is demonstrating that both humans and apes have the "hippopotamus major" in their brains:

But if Ptthmllnsprts is a pisstake on Huxley, he's an affectionate one, as Kingsley and Huxley were as friendly as a Christian minister and the man who coined the term "agnostic" could be. I was disappointed he wasn't based on Owen's side in the debate, as Owen has always looked to me like he eats the souls of children to sustain his life-force: 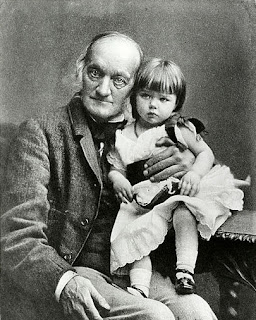 I'm not sure my students appreciated Kingsley per se, but the content wasn't really the point of the thing, and some of them did laugh at the bit about pterodactyls, though since I gave them no context,  I think they were a bit thrown about the whole 25-years-ago-they-were-discovered thing. I don't know why I always come back around to Kingsley these days!
Posted by Steve at 8:30 AM