So this Wednesday, I successfully defended my dissertation, the culmination of three years of writing and research, and eight years of graduate school. It's a pleasant, but almost surreal feeling: in a few weeks, for essentially the first time in my life, I won't be a student. And it only took three decades to get to that point!

Here are some fun facts about my dissertation for you:

And this is it: 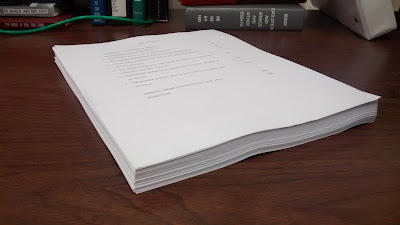 Double-sided, and minus the first few pages because they seem to have walked off.

Of course, I'm not entirely done-- there a typos to fix and minor edits to make-- but I'm almost there. Commencement, here we come!