How Do You Batten Down the Hatches When You Don't Have Any Hatches? (and what does "batten" mean anyway?) 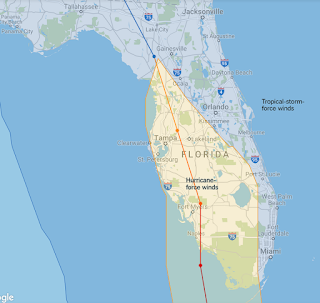 When you move, people always ask you how the old place is versus the new place, and so you find yourself (or at least I do) developing some consistent responses. "I won't miss Connecticut winters but I will miss Connecticut fall" is something I've found myself saying far too often. Sometimes a follow-up will engender that I will miss snow days, and then me fumbling into the idea that Florida might have "hurricane days," haha.

Well, it turns out it does. My first hurricane turned out to be (Wikipedia informs me) the most intense Atlantic hurricane to strike the United States since 2005, and the first major hurricane to make landfall in Florida since 2005. Well, whoops.

Initial projections had Hurricane Irma going up the east coast of Florida, whereas we're on the gulf coast, so we decided to hunker down. I first really started taking its intensity seriously last Wednesday, when the University of Tampa cancelled classes for Thursday through Monday. Less, I think, because they were convinced UT was going to be a disaster zone, and more because the students were already bailing. Each of my three sections (of 17-22 students) was already missing four or so students on Wednesday, as worried parents pulled their children out of the state and back home to Chicago or wherever, and conversations with my students indicated the rest of them were on their way out soon. (At least three-quarters of my students are not from Florida.) By Friday there probably wouldn't be enough people left to make viable class sessions.

I attempted to busy myself with hurricane prep, but mostly I just ended up busying myself with reading articles on Reddit and elsewhere about my imminent demise. We tried to keep our ears to the ground and figure out what locals were doing, though, and most didn't seem to be freaking out, so we figured out where our local pet-friendly shelter was, and bought some canned goods (all that was left was canned French onion soup and canned lobster chowder... I'm sure they're great) and bottled water (I know we could just bottle our tap water... but we actually don't have any large bottles!). Hillsborough County has five pre-set evacuation zones based on flood risk, and our house wasn't in any of them, so wind was the primary thing we had to worry about. We moved stuff way from windows (easy because much of our possessions are still boxed), cleared our backyard of loose objects, but we couldn't board up our windows-- all the plywood was sold out at all the stores!

We had confirmed early on with our friends Jared and Angela in Columbia, South Carolina, that we could head up there if we needed refuge, and as the projected track of Irma shifted west we began considering it more and more. Finally, on Saturday morning (about 36 hours pre-Irma), with the eye track now running right through our town, we decided to get out. Sheltering in an interior room seemed a lot less fun if our windows had a good chance of being blown out! All our out-of-state friends and family seemed quite relieved at the decision. Our cats, though, were less than thrilled. (One poops about an hour into any extended car trip... it's great. Especially when you forgot to pack plastic bags.)

We weren't the only people to book it out on Saturday; the interstates were pretty busy, though not really the gridlock that some media reports had made them sound. Taking I-4 east out of Tampa towards Orlando, we noted that signs had been activated that allowed driving on the median... but no one actually was, so we held off.

Eventually we ended up in a standstill, and then a few cars zipped by us on the shoulder, we decided we'd follow them, zooming past the stopped cars. This made a few of the drivers of parked cars very, very angry-- one gave us the finger, another did the thing where you pull halfway into the shoulder, though he backed off eventually. I saw his face as we passed him, and man he was just pissed beyond all belief. Little did they know, we said, that what we were doing was actually legal!

Only I started to realize that I hadn't seen one of those you-can-drive-on-the-median signs for quite some time... certainly not since I started driving on the median. So, uh, I slipped into the left lane at the next available opening. Whoops.

Our other big road adventure was stopping for food and gas in the town of Pooler outside Savannah. Hayley had insisted we get Chick-fil-A, which took about forty minutes of driving. But on arriving, we discovered the Chick-fil-A was closed... and so was the McDonald's, and the Arby's, and the Five Guys, and basically every fast food restaurant at the whole exit except for a Sonic. The Sonic was drive-thru only, and the drive-thru line wrapped around the whole building! My Google Timeline tells me we spent forty minutes in Pooler between driving up to a bunch of closed restaurants, and waiting in line at the Sonic. (It was, I believe, my first time ever getting anything other than a shake at a Sonic.)

We made it to Columbia without further incident. We ended up mostly just hanging out with Jared and Angela: though Irma was by this point projected to go up through Georgia, there was enough wind and rain heading for Columbia that basically everything was closed. (Our friend Angela works at Publix, and she reported that everyone bought bread and ice cream in preparation for the storm. Like, ice cream? Do you get how storms work?) So we just watched a lot of tv: four episodes of Futurama, three of Rick and Morty (my first-ever episodes, fact fans), and all three Edgar Wright/Simon Pegg action comedies. and pored over the livestreams. Hayley watched the local news; I just kept looking at a webcam pointed at the UT campus.

Irma made landfall in Florida Sunday night, but wasn't supposed to hit Tampa until 1am, and neither of us could stay up that late. Even by the time we went to bed, though, it was clear Irma was a lot weaker and less close to Tampa than predicted. My glimpses of the UT webcam were just not terribly interesting. Monday, there was lots of wind and rain in Columbia, though nothing too bad where we were.

So, on Tuesday with no information about our home (would it have windows still? a roof? power? would the pool have flooded into my living room? would a looter have stolen all my Doctor Who audio dramas?), we headed back to Florida (via Augusta, Georgia, where another friend of ours resides). The drive home was much less smooth: for the last forty miles of I-95 S in Georgia, every exit was barricaded by the state highway patrol, sometimes supplemented by the armed forces! As far as I could tell, there was no advance warning of this. Thankfully we'd gassed up in Augusta despite having over half a tank, or we might have been in some trouble. We later found out that the entire county was basically without power, so they just kept all the returning refugees on the interstates. (As was the first rest stop in Florida, meaning we had to use port-a-potties.) It was a little creepy at first, like something out of a post-apocalyptic television programme. 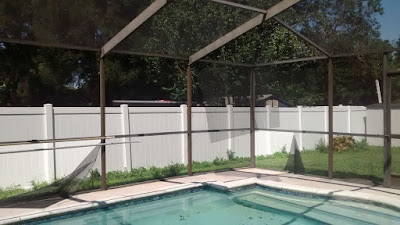 Getting off the interstate in our town was a little worrisome, as there were clearly a lot of power outages. But when we arrived in our subdivision, all the lights were on-- and when we got inside our home, everything was fine. No windows broken, the roof was still on, the power had recently come back up, and no one had stolen my copies of Zagreus and Renaissance of the Daleks. The only damage is that some of the screen segments on our pool enclosure were torn (several already were).

Things are slowly returning to normal here, though I'm excited for every extra day where they don't charge on the toll highways. UT reopened yesterday, though I anticipate a significant fraction of my students will still be missing from class today, as they work their ways back to Tampa as the transportation infrastructure revitalizes. (A guy I talked to in the faculty lounge yesterday said only half his students were in class.) My wife ended up with the whole week off; she won't go back until Monday. Some of my colleagues are still without power, though I haven't talked to anyone who's suffered major damage yet, thankfully.

We were definitely lucky. We've got to get some plywood and prep window boards ahead of time once supplies come back. Anyone know the best way to board up your windows when your exterior is made of stucco?
Posted by Steve at 8:30 AM