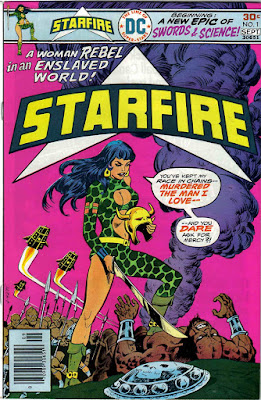 Four years before the Teen Titan Starfire debuted, and almost forty years before she got her own series, there was a very different DC series called Starfire. A take on the sword-and-sorcery comics then popular, it billed itself as "sword-and-science": it was set on another planet, and in a world not with magic, but one that had been conquered by aliens and partially regressed into barbarism after an era of great scientific achievement.

In this era, humans are the subjects of the Mygorg, a brutish alien race; the main character, Starfire, began her life as a human slave of the Mygorg, but when she's about to turn eighteen, she realizes she's going to become their sex slave! She runs away, and is rescued by a priest who helps train her in the ways of combat. They fall in love, he dies, and she vows to destroy the Mygorg forever. So she sets off with a band of adventurers seeking the people and resources to do exactly that. 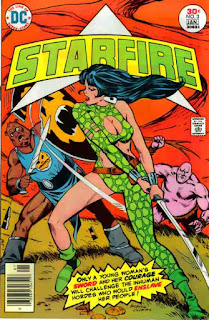 Starfire was one of very few female-led DC superhero-adjacent titles in the 1970s (were the other just Wonder Woman, Lois Lane, and Supergirl?), but more importantly it was probably the first comic to feature an Asian protagonist.* Well, sort of-- since Starfire is set on an alien planet nothing to do with Earth, she can't be from China or Cambodia, but we are told, "her mother was white, and the father yellow," artist Mike Vosburg draws her with East Asian facial features, and the colorists depict her skin tone as slightly different from all the white characters (though she has blue eyes). Though I suspect it was done to make her a little more "exotic" and thus sexy, it was a surprising moment of diversity for the comics of the 1970s.

If you look at the credits at the bottom of this entry, you'll see that even though Starfire had a consistent penciller, the series accrued four writers and three editors in eight issues. The series is kind of jerked around and never really takes off as a result. David Michelinie creates the baseline in his original two issues: the first gives Starfire's backstory, climaxing in a surprisingly brutal scene where she beheads the Mygorg who killed her lover and would have taken her as a "bride." Then in #2, he establishes the formula: Starfire and her band (the only named member of which is Thrumdahg) come to a place, fight some Mygorg, and advance onwards. In this story, they acquire a map with the location of the fabled "Lightning Lords" on it, humans with advanced weapons that will help Starfire's band win their battles, thus setting up a quest behind the formula.

Michelinie stops it from being too straightforward, though; Starfire's eagerness for a fight in #2 disrupts a manor whose human lord has an uneasy truce with the Mygorg, for example, culminating in the accidental death of the manor lord's young son. So Starfire's quest will be tinged with a need for understanding complexity, and an undercurrent of tragedy. 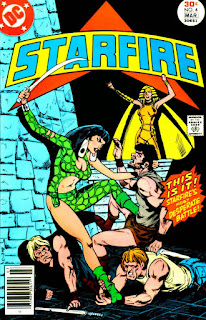 The next three issues are the work of Elliot Maggin, who basically reproduces Michelinie's issue #2 formula. He keeps adding new members to Starfire's band, including the mute Thump and the poet Moonwatcher. Beginning with Thrumdahg back in #2, though, there's this consistent thing that the members of Starfire's band all think she really needs some loving, and so she's always fending off unwanted advances. Thump is the only exception to this. It's a weird, unpleasant choice, even in the context of a comic that began with its protagonist almost being forced into a life of sexual slavery. Like, why do I want to read about a band of would-be rapists? Still, Maggin's first two issues are solid adventure tales, each setting up its own interesting situation and then resolving it in the course of a single issue.

In issue #5, though, things begin to change, as Starfire meets the Lightning Lords at last in what's the first part of a three-part story by two different writers. The premise of the series begins to warp: while in the first five issues, it was sword-and-science, no sorcery needed, #6 introduces an out-and-out sorceress with magical powers! 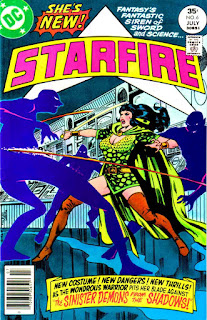 The attempts to retool the series also become pretty brazen. In #6, while camping outside the lair of the Lightning Lords, who live in the middle of a mountainous wilderness, Starfire runs off in the middle of the night and comes back in a new costume. Which she allegedly picked up at a marketplace? Like why is there a human marketplace in the middle of nowhere selling sexy costumes for adventuresses? 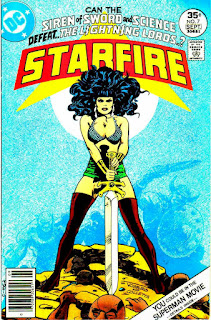 This new costume lasts one whole issue, as in #7, Starfire is charging through a doorway and her costume gets caught on a nail and falls off, meaning she has to run around in a bra and short pants. I shit you not. Vosburg doesn't even draw the nail; in one panel, Starfire's shirt is ripping, and in the next she observes, "Looks like I lost my modesty to a rusty nail! Nothing ever comes free in this world!" Like, what does that even mean? And then she never mentions it again, apparently content to wear what is essentially a chainmail bikini. (I actually did like her original outfit, a sort of asymmetrical Seven of Nine-esque jumpsuit.)

Also, in #7, new new writer Steve Englehart must have also disliked the fact that the majority of Starfire's band were rapists, because he kills off all the supporting characters except for Thump and Moonwatcher in a teleporter accident! Like, a supercomputer tries to beam a group of them out of danger, but it doesn't know human biology, and they all die except Moonwatcher (the least rapey of the ones who weren't Thump; he seemed to want to charm Starfire into sleeping with him). Starfire also becomes a bystander in her own story in this storyline, as it turns out Thump is a genius computer programmer, and he makes a lot of decisions while Starfire just yells and fights a lot. 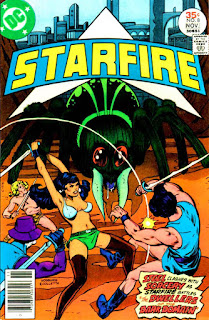 #8 introduces a new new direction, bringing back the order of priests Starfire's lover from #1 belonged to. The book promises there are more issues to come, but they never happened; I'm not sure why. The DC Implosion that killed Star Hunters was over a year away. Well, I mean I guess I know why, because this book's writer and premise were constantly shifting, and each change made it worse, not better. (Creator David Michelinie did slip Starfire into a one-panel cameo in Star Hunters #7 as another avatar of the same multiversal force as Star Hunters's lead character. But that was Star Hunters's last issue too!)

The one consistently good part of the book was the artwork of Mike Vosburg and Vince Colletta. They do great fantasy stuff, especially with Starfire herself: thick lines that really show off her beauty and her power. Too bad the writing couldn't consistently match what they were capable of.

* Karate Kid received an ongoing series in Mar./Apr. 1976, and he's half-Japanese, but that's a retcon, and I'm not sure when it was established.
Posted by Steve at 8:30 AM