Is Thomas Hardy Responsible for the Word "Cliffhanger"?

Previously I blogged about Thomas Hardy's A Pair of Blue Eyes. Like many Victorian novels, A Pair of Blue Eyes was serialized; it appeared in installments in numbers of Tinsley's Magazine across 1872 and 1873. One installment ends with Henry Knight, one of the principal characters, stumbling down a cliff. I apologize for a lengthy quotation; Knight has just saved a girl, Elfride from tumbling down too, but is losing his grip:


Between the turf-covered slope and the gigantic perpendicular rock intervened a weather-worn series of jagged edges, forming a face yet steeper than the former slope. As he slowly slid inch by inch upon these, Knight made a last desperate dash at the lowest tuft of vegetation – the last outlying knot of starved herbage ere the rock appeared in all its bareness. It arrested his further descent. Knight was now literally suspended by his arms; but the incline of the brow being what engineers would call about a quarter in one, it was sufficient to relieve his arms of a portion of his weight, but was very far from offering an adequately flat face to support him.
In spite of this dreadful tension of body and mind, Knight found time for a moment of thankfulness. Elfride was safe.
She lay on her side above him – her fingers clasped. Seeing him again steady, she jumped upon her feet.
‘Now, if I can only save you by running for help!’ she cried. ‘Oh, I would have died instead! Why did you try so hard to deliver me?’ And she turned away wildly to run for assistance.
‘Elfride, how long will it take you to run to Endelstow and back?’
‘Three-quarters of an hour.’
‘That won’t do; my hands will not hold out ten minutes. And is there nobody nearer?’
‘No; unless a chance passer may happen to be.’
‘He would have nothing with him that could save me. Is there a pole or stick of any kind on the common?’
She gazed around. The common was bare of everything but heather and grass.
A minute – perhaps more time – was passed in mute thought by both. On a sudden the blank and helpless agony left her face. She vanished over the bank from his sight.
Knight felt himself in the presence of a personalized loneliness.

And boom! You'll have to wait a month to read how that one resolves.

If you read a lot of Victorian novels, you'll know they're rarely so, well, cliffhangery in their serialization. Usually, they just kind of stop where one would stop any chapter while writing a novel. Wilkie Collins is probably the only Victorian novelist who bothers to have cliffhangers-- some of the ones in The Woman in White will knock you over. 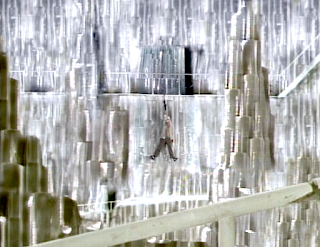 As you can see above, this cliffhanger is surprisingly literal, the most literal cliffhanger I can think of other than the bit in the Doctor Who serial Dragonfire where the Doctor climbs down a cliff for no readily apparent reason, gets stuck, and then the theme music comes in. A lot of articles out there assert that it is thanks to Thomas Hardy and A Pair of Blue Eyes that we thus have the word "cliffhanger":
These are hopefully all sources that do their research, but I am skeptical of the claim, because the word "cliffhanger" doesn't come into existence until around 1931, according to the OED, which cites an article about movie serials from Variety: "Probabilities are a serial based on the life of Buffalo Bill and a treasure island thriller. Henry McRae, in charge of the cliff hangers, is searching for story material." It cross-references "cliff-hanging," which was used slightly earlier in 1930, still in Variety: "Fitting..into the pattern is the revival of the serial, with Universal and Pathe leading the procession toward cliff-hanging heroines."

Google Ngram Search backs the OED up on this, with no hits for "cliffhanger," "cliff-hanger," or "cliff hanger" in the whole nineteenth century. Google Books's earliest hit is hard to figure out because it has a number of misdated items and books you can only see snippets of, but around 1937. And then it doesn't refer to the suspenseful ending the way we use it now, but to the whole adventure serial itself.


It seems unlikely to me that movie industry insiders of the 1930s were thinking of Thomas Hardy's third Wessex novel and not the more melodramatic perils of their own stories. As far as I can tell from Google Books, the first person to link the origins of the term "cliffhanger" to Thomas Hardy was the literary critic and novelist David Lodge, who says this in his 1992 collection The Art of Fiction:


[A Pair of Blue Eyes] contains a classic scene of suspense.... The word ["suspense"] itself derives from the Latin word meaning "to hang", and there could hardly be a situation more productive of suspense than that of a man clinging by his finger-tips to the face of a cliff, unable to climb to safety – hence the generic term "cliffhanger". (14)

You'll note that if you read Lodge very literally, he doesn't actually say Hardy's novel led to the creation of the term-- he just says A Pair of Blue Eyes has a guy hanging off a cliff, and that the most suspenseful thing there is is hanging off a cliff, which gives us "cliffhanger." But it would be easy to read his discussion here and think A Pair of Blue Eyes gave us the word "cliffhanger." I can't decide if this is deliberately or negligently misleading.

Presumably it carried forward from there, making its way onto the Internet. The Victorian Web article cited above is dated to 26 April 2006; on 3 May 2007, the Wikipedia article "cliffhanger" was updated to include the fact that A Pair of Blue Eyes was the originator. That same edit added a lot of information about Wilkie Collins which has since been stripped away, but the Hardy anecdote remains in the article to this day. Far be it for me to suggest that journalists are lazy, but all my other citations above post-date that Wikipedia edit. I'm not the only person to be suspicious; Google Books revealed to me a book called Totally Scripted: Idioms, Words, and Quotes from Hollywood to Broadway that Have Changed the English Language (2017), whose author, Josh Chetwynd, says "it's unlikely his [Hardy's] original plot directly spawned the term" (44).

While it's pretty neat that Thomas Hardy's cliffhanger was in fact a literal "cliff hanger," and it makes for a nice anecdote, people are overstating the case when they credit Thomas Hardy or reaction to him as the source of the word. I blame David Lodge.

(Though the Hardy cliffhanger claim mostly seems to be restricted to popular venues, I did find it in a book published by Oxford University Press. Hopefully it doesn't keep reproducing throughout academia in error.)

* This article seems to think Dickens's The Old Curiosity Shop was written in the 1900s, so we should be very doubtful about any of its assertions.
Posted by Steve at 8:30 AM