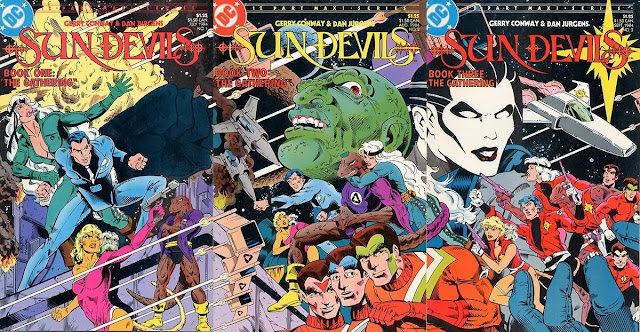 DC was really pumping out its Star Wars-inspired space-opera limited series in the 1980s. Spanner's Galaxy's six parts were entirely published during the twelve parts of Sun Devils, an epic series that sadly remains uncollected. Sun Devils begins with daredevil pilot Rik Sunn, inhabitant of a human colony, who's about to begin his career as a diplomat. Rik believes a diplomatic solution to the expansionist Sauroids of the Triad Confederacy can be found, but is quickly proven wrong when his family and their entire planet are obliterated by the Sauroids. Rik travels to Earth to enlist and fight the Sauroids, but the Earth government is as complacent as he was.

Misadventures eventually take him to Centauri, where he becomes the leader of a crack team of fighter pilots / commandos called the Sun Devils, consisting of Anomie Zitar, a sexy gene-edited human escaped slave; Scyla, a sexy Belter smuggler; Shikon, a Sauroid slave who fights to free his caste; One, Two, and Three, cloned mechanics; and Myste, a sexy scientist turned into a noncorporeal being. The Sun Devils wear matching uniforms and work directly for the Prime Speaker of Centauri, trying to stop the Sauroids, especially when it becomes clear the Sauroids are developing a superweapon capable of exploding suns. 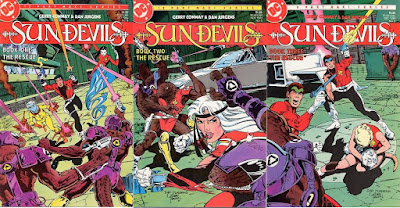 Sun Devils was originally developed by Gerry Conway and Roy Thomas, who brought aboard a young Dan Jurgens as artist. Thomas didn't have time to contribute, so the series was written by Conway, but as time went on, Jurgens's role increased; eventually he was doing the dialogue for Conway's plots, and by the end of it all he was writing and illustrating. Jurgens went on to a highly successful career, and this was his first big break-- some of his earliest comics art, and his earliest published writing.

It's easy to see why. Jurgens is easy to dismiss as workmanlike at times if you're ungenerous, but here he's clearly already a master craftsman. His layouts are dynamic, the action is clear, and the characters expressive. Big and small moments alike land perfectly. The art is aided by the fact that this is one of the 1980s' so-called "Baxter books," printed on high-quality paper that really make the colors pop, particularly the black inks. (To be honest, I think this is my favorite kind of comic coloring. Superior to the Silver Age stuff in quality and clarity, but not taken over by the more subdued "realism" computer coloring enabled in the 1990s.) 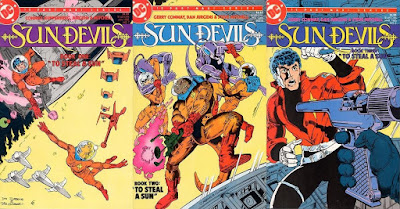 The twelve issues are divided up into four stories-- The Gathering (#1-3), The Rescue (#4-6), To Steal a Sun (#7-9), and The Last Battle (#10-12)-- each having its own beginning and end, but with a larger story running through it all. It's a nice structure, like maybe watching a four-part tv miniseries. In The Gathering, the team comes together; in The Rescue, they go to the Sauroid homeworld to rescue an imprisoned scientist; in To Steal a Sun, they try to build a superweapon; and in The Last Battle, they try to stop a Sauroid superweapon. There are some surprisingly complex and adult moments, but also it's a fun, action-driven series about a colorful group of characters.

Occasionally the plotting is a bit wonky (there's a bad guy introduced in the final three parts who doesn't really go anywhere, or there's one issue where the opening four pages are spent showing Scyla in a barfight-- a thing we've seen already!), and I found the last issue unsatisfying (the characters have an unrealistic level of trust in a bad guy, because they bizarrely overestimate the leverage they hold over him), but I enjoyed the story on the whole, and it's a shame there wasn't a sequel. I think the ending is setting one up, though I suppose it might be an "...and the adventure continues..."-type ending. 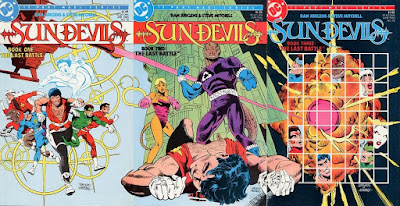 Dan Jurgens did continue the story, kind of, in a 1994 issue of Superman (vol. 2 #86). Even though Sun Devils clearly takes place in the future, a lost-in-space Superman runs into a spaceship piloted by an aged Rik and the daughter of Scyla, chasing down a surprise-not-dead Sauroid ruler. (There's a throwaway line where Scyla's daughter says she doesn't know what century they're in anymore.) I found it a dissatisfying conclusion, a bit too downbeat, and not really an organic outgrowth of where we left the characters in Sun Devils #12.