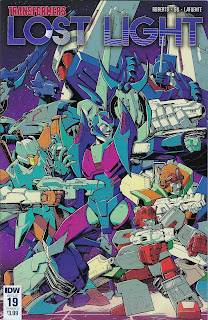 The Lost Light might have accomplished the goal of their quest (kind of) in The Everlasting Voices, but that doesn't mean the story was over. There's still the mysterious Grand Architect out there, and what were Drift's visions of, and hey, doesn't Getaway still control the Lost Light? All that and more needs to be reckoned with in Crucible, which at six parts is I think the longest story in the history of More than Meets the Eye/Lost Light.

It's one of those stories that at times becomes too epic for its own good. The best MtMtE storylines turned on the characters: okay, so Overlord was in the basement and wasn't that neat, but what really made his attack noteworthy was the way all the characters reacted to it, and the emotions that engendered in the reader. Crucible is pretty epic, and it has a lot of answers to provide, but the questions weren't ones I was particularly burning to know. Like who is the Grand Architect? It turns out I didn't particularly care; the characters are what carried me through all these issues, not the mythology.

So the best moments of Crucible are those based on character. Rodimus finally getting his showdown with Getaway, but then stepping into the flames to rescue him and being restored to his original paintjob in the process was an awesome moment. Megatron making his comeback from the Functionist universe, having spent centuries trying to redeem himself but still feeling unredeemed was a perfect use of the character, especially when he reconciles with Rodimus and Ultra Magnus (who previously thought Megatron bailed on them).

The second-best moment of the whole story was probably when the crew splits up, and a whole group of different characters each have to open the Matrix of Leadership, which is morality locked. The group of characters selected to do this is great (Swerve, Tailgate, Ratchet, Nautica with Brainstorm, and so on), and the speech Rodimus gives to enable them to make the final pulls is heartwarming. I've grown to love these characters, and this was an excellent way for James Roberts to highlight that.

The best moment is the true revelation of what's the deal with Rung, but I won't spoil that for you here.

So those character moments are great, and there are some epic sequences, but I found the explanations behind the Grand Architect, the Warren, and all that jazz much less compelling than the character stuff it enabled. But compare this to some of the classic MtMtE stories, and I think the ratio of character-to-plot was better in those, probably because Roberts just had to get through so much plot in six issues. (I think Lost Light was originally supposed to last twice as long?)

There's also the final Lost Light story, "How To Say Goodbye and Mean It: Part 2." This is hard to talk about without spoiling, but I thought it was mostly spectacular. The story is set many years after Crucible, with the Lost Light crew reunited for the funeral of a friend. In dialogue and flashbacks, we learn what all the main characters have been up to in the intervening time: Rodimus and Minimus Ambus and Megatron and Brainwave and Nautica and Whirl and so on.

I'm a sucker for this kind of thing, and James Roberts does it very well, giving a mix of happy and tragic afterlives for these characters. This has been, after all, a series about damaged people, and "How To Say Goodbye" doesn't shy away from that. Some of these people never did get over the psychological effects of the war. There are tons of "awwwww....." moments here.

On the day Lost Light #25 finally came out, I told my class I couldn't hang around after class because I had to get to the comic book store. "What are you going to do there?" one asked. "Buy comic books!" I answered. "So you don't have to get there," one said. I explained that I did because the final issue of a comic book series I really liked was coming out. They asked what it was, and I replied that it was a Transformers comic... and that I seriously, without sarcasm, believed it was one of the best comic books ever written.

I stand by that. Between them, More than Meets the Eye and Lost Light provided (arguably) one hundred issues of entertainment. In terms of building characters, creating tragedies, and telling jokes, I have never read a comic book series this good. It made me cry more than once, and made me laugh an absurd amount, too. It wasn't perfect, but I loved almost every issue of it. The whole reason I started reading IDW's Transformers comics was to get to More than Meets the Eye, because everything I had read about it told me I would like it. I did like it, and it was work well worth out.

This was a fitting ending, and I look forward to rereading the series at some point; I suspect it will be even better now that I'm better at reading Transformers comics, and now that I can understand all the hints about where it will go.

Next Week: Nothing! Be back whenever I get around to reviewing the digital collection of Unicron, which isn't out until March.

"How To Say Goodbye and Mean It: Part 2" originally appeared in issue #25 of Transformers: Lost Light (Oct. 2018). The story was written by James Roberts, illustrated by Jack Lawrence, colored by Joana Lafuente, lettered by Tom B. Long, and edited by David Mariotte.
Posted by Steve at 8:30 AM