Listening to James Bond at the BBC (Part IV: 007 Reloaded)

In 2012, BBC Audio (in its short-lived incarnation of AudioGO) released a new set of James Bond audiobooks under the branding "007 Reloaded." It was a project spearheaded (I think) by Lucy Fleming, niece of Ian Fleming, but better known to me as the actress who plays Jenny in Terry Nation's Survivors. Each book was read by a different prominent British actor, including Dan Stevens (what's-his-face in Downton Abbey), Bill Nighy (you know who he is), Jason Isaacs (Captain Lorca in Star Trek: Discovery), David Tennant (fake Mad-Eye Moody in the one about the wizards), and Kenneth Branagh (Kenneth's Branagh's Mary Shelley's Frankenstein). AudioGO went bankrupt in 2013, but they were republished by the current rightsholders. These are still the versions of the Bond audiobooks most readily available; I got both of them via Overdrive at my local public library. 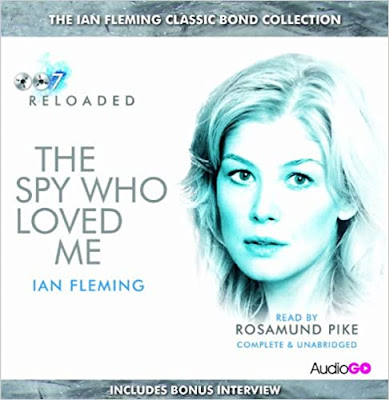 I didn't have the desire to listen to all of them, since experiencing each James Bond story as a novel, as a film, as a radio play, and as a comic is more than enough, thank you. But I did decide to listen to two of them. One is the reading of The Spy Who Loved Me: the novel has a first-person female narrator, and the audio is read by a woman, Rosamund Pike. I doubt Spy Who will be adapted in BBC Radio's adaptations, but you can imagine this as a radio adaptation, given its first-person frame and overall lack of Bond.

The other one I decided to listen to is You Only Live Twice, because it is read by Martin Jarvis, who narrates the current BBC Radio adaptations, so it slots right in as well. You Only was previously adapted by the BBC in 1990s, but hasn't been adapted as part of the current Toby Stephens strand. I imagine it will be eventually, but who knows.

My thesis about audiobooks is that an audio reading makes a good book better and a bad book worse. I find nothing to contradict that thesis here. I enjoyed The Spy Who Loves Me: it's weird for a James Bond book, but I find that Fleming creates a mostly plausible female character (easy for me to say, admittedly), and puts her in a harrowing situation with his usual style. Rosamund Pike's reading elevates the book: with her as the voice of Vivienne Michel, she seems a even more real character. Pike brings her to life in all her young inexperience and conflicting desires and out-of-her-depth-yet-working-to-hang-on-anyway-ness. Pike puts on a Canadian accent, but I didn't notice any issues. I listened to it last summer over a couple afternoons while pushing my son's stroller while he napped, and I greatly enjoyed the experience despite the Florida heat. 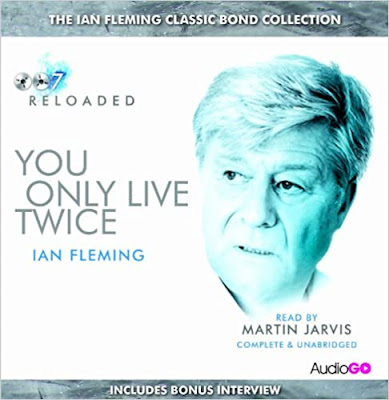 You Only Live Twice, on the other hand, drags on and on when you have to listen to someone read every word, even if you use your iPod's "speed up" feature. It's also worse on a second read, since you know that all the stuff in the first half where Bond gets taught how to "be Japanese" isn't even going to matter. His Japanese-ness doesn't help him on his mission, it's never put to the test, it doesn't change anything about him. So why do we have to listen to so much about the cultures and the mores? Martin Jarvis is a great reader; I wish he had more action scenes to work with, because he's good at them. He does good with the various parts-- I think he could play M well-- but particularly excels with "Tiger" Tanaka, the head of the Japanese secret service, who really comes to life as a full character in  Jarvis's performance. The bit where Tanaka remembers the beauty of being a kamikaze pilot was actually a bit moving. But overall, it felt like it dragged on for ages, at 7½ hours to Spy Who's five.

I am curious about some of the other ones now, but as I near the end of the novel series (just Octopussy & The Living Daylights and The Man with the Golden Gun to go), I think I've had enough of Bond to last me a while, so Hugh Bonneville's Goldfinger will have to wait until I start to get nostalgic.
Posted by Steve at 8:30 AM