Star Trek: The Fall: The Crimson Shadow
by Una McCormack

If this sentence is ever actually uttered in The Crimson Shadow, I missed it; the back cover uses "restore Cardassia to its proper place and glory" which seem a bit unwieldy for a baseball cap. Despite being published in 2013, the book has clear echoes (pre-echoes?) of populist movements like Brexit and Trumpism: a yearning for a better past which was actually not better than the present. Institutions designed for democracy are being co-opted for undemocratic purposes. It would be depressing if it wasn't for the fact that Una McCormack is able to see a way out of it all, but more on that in a bit.

Just as Revelation and Dust was a Deep Space Nine novel de facto if not de jure, The Crimson Shadow has the Enterprise-E on the cover, and thus seems to be a Next Generation novel de facto. But like a lot of McCormack books, it actually feels like a novel, not a pale reflection of a tv episode. One of the things I really like about her approach is that she picks and chooses her viewpoint characters based on thematic relevance-- every character who we spend time with doesn't just advance the plot, but the ideas of the novel. This means several Enterprise characters don't really appear; the novel gives us the ones we need for the story being told: Picard, Šmrhová, and (in what turns out to be a great surprise, so don't read on if you mind spoilers) Glinn Dygan. On the other hand, we also get a significant storyline featuring Arati Mhevet, a senior investigator in the Cardassian constabulary. And, of course, Elim Garak. Together these characters create a tapestry of post-Dominion Cardassia, and a story about how to behave ethically in the face of institutional pressures to do otherwise.

I really liked Mhevet. She's a cop in the new postwar Cardassian constabulary, one that tries to be answerable to the people-- not to the interests of power like prewar Cardassian institutions. But though she does her best, her complacency and short-sightedness do her in at first before her investigations kick into gear. I really liked every scene featuring her as she tries to navigate what is the right thing to do in some tricky situations where she is the only person trying to do right at all. But even when it seems like it's just her against the planet, she sees things through.

There's a scene featuring her and Garak near the end that brings the whole novel into focus:


Folding his hands around hers, he [Garak] gave her a steady, sky-blue look. "But you understand, don't you, that the institutions don't matter? The Obsidian Order, Central Command, the True Way, Starfleet, empires, unions, federations-- these are names and names only. They are tools. They count for nothing if the purpose is flawed. That was mistake for a long time-- confusing the purpose with the instrument. It took me a long time to learn the truth."
"What is the truth?"
"The truth?" Garak laughed, softly, as if he had never imagined that he would be asked such a question. "The truth is that the institution flourishes only when the people who comprise it flourish. And if the people are sick, the institution will be sick." He squeezed her hand. "If there's anything I could teach you, I'd teach you that."
"I think I knew that. But I became complacent, or frightened, or something.... Whatever it was, I held myself back from what was going on."
"Yes," he said, nodding, "that was your mistake, Arati. But it doesn't stop, you understand? It doesn't ever stop. We can never hold ourselves back." (267)

Ostensibly this is about Mhevet, but it is also the idea underpinning the strands about Picard and Šmrhová. Cardassia is on the verge of seeing the Federation withdraw when President Bacco is assassinated over in Revelation and Dust, and the new interim Federation president is a Bajoran who is less kindly disposed toward Cardassia. He gives some orders that will cause harm to the planet and its standing: and Picard and Šmrhová both have to find ways to do good within an institution that inhibits their ability to do it. Šmrhová has been a regular character since Destiny, but like with Bowers in McCormack's Brinkmanship, this was the first time I felt she had a personality, as she takes the action she thinks is right-- violating a presidential order-- and in doing so saves the day. There's a great scene between her and Dygan at the end. Dygan is a serious young man, prone to overthinking everything. He has to participate in some awful stuff here, but he and Šmrhová find solace in each other: her being the Starfleet officer who doesn't think, and knows when to bend the rules, him being the career Cardassian officer who learned to know when his institutions were leading him astray.

This is Una McCormack, so on top of all this thematic richness, there's of course Garak and Cardassia. McCormack does a great job of threading the needle with both of those, making them recognizable yet evolved at the same time. I loved a scene where a bunch of Cardassians get discomfited by the idea of peacefully rally. A bunch of people freely stating their opinions in public!? This is a proud people but a stubborn people, too; they are weighed down by their past instead of empowered by it. I also thought McCormack did a good job with the politics of it all, especially in the way Castellan Garan gets pushed into an untenable position.

And yeah, Garak. His letters (picking up from A Stitch in Time) are a constant delight, as is his dialogue. McCormack nails his voice; the idea that he had a long-term friendship with Bacco is a great one, as is the way Garak expresses so much of himself through the discussion of literature. (Garak loving Austen isn't a thing I would have expected but it makes so much sense as soon as you are told it.) She even makes the idea of Garak becoming leader of Cardassia plausible! Well, kinda. I buy it from a character perspective; I don't quite buy that Cardassia would vote for a former Obsidian Order agent. But I think this will open up interesting avenues in the future, and I look forward to seeing its ramifications in future books.

Like I said, this is a book that anticipated Brexit and Trumpism. But it also anticipated a way out: Cardassia cannot be made "great again" through its institutions. But it can be made great if its people are great, as long as a rose grows in the ruins and someone is willing to speak truth to power. This book is a moving, meaningful celebration of the Cardassian (and human) ability to stop, to say what must be done, and in doing so change both one's self and the world. 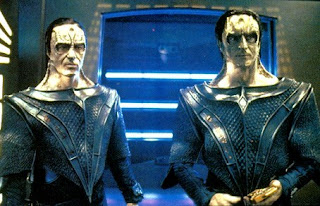 
I read Destiny-era Star Trek books in batches of five every few months. Next up in sequence: The Fall: A Ceremony of Losses by David Mack