Star Trek: The Fall: The Poisoned Chalice
by James Swallow

20 September–12 October 2385
The Fall is back in thriller mode for The Poisoned Chalice-- a mode I knew James Swallow was pretty successful at from his earlier Cast No Shadow. I complained that I found David Mack's attempt at a thriller in A Ceremony of Losses weak; reading The Poisoned Chalice left me better able to understand why. I don't read a lot of governmental thrillers, but I do like those stories where someone has to turn against their own government because it's corrupt. A good thriller is disconcerting, and I think I respond well to that, arguably for the same reason that I like science fiction, and cosmic horror, and mystery stories, and Victorian novels: a good thriller is a story of epistemological crisis. The world does not work the way you thought it did. In A Ceremony of Losses, it was all too clear how the world worked: Bashir was good and Ishan was evil. The Poisoned Chalice is more complicated. Our protagonists-- Riker, Vale, and Tuvok most prominent among them-- don't just not know who to trust, they don't really even know what they should be trying to do because they don't have enough context.

Will Riker is promoted to admiral here. I have a feeling that this is going to mean the Titan series once again is dragged away from its original remit of exploration, but I also have a feeling that a good writer can do something with this, and Swallow does here, as Riker tries to figure out what kind of actions he can take on Fleet Admiral Akaar's behalf to save the heart of Starfleet. It's engaging stuff, though how much Akaar kept Riker in the dark ultimately turned out to be kind of contrived, as once Riker tracks Akaar down, Akaar just tells him what's going on and doesn't really have a clear reason to not have told him earlier. This leaves the disconcerting nature of the earlier parts ringing a little hollow, even as they were engaging as I read them. I did like the subplot about Troi and the Andorians; the Titan series made Deanna chief diplomatic officer, and The Poisoned Chalice shows her putting her empathy (like, normal empathy, not space-talent empathy) to good diplomatic use.

I think the Tuvok plot also suffers a little in retrospect even if it's engaging while you read it. Tuvok, Nog, and Tom Riker are among those assigned to a secret unit of both Starfleet and non-Starfleet personnel trying to track down the killers of President Bacco. This is more action-y than the Riker subplot, and Nog especially gets to show off a bit (which is good, given how David George's Deep Space Nine novels have sidelined him), and I always like a bit of Tuvok. Swallow does a good job with Tom Riker, too, balancing the line of making you believe this is someone Will Riker could have been-- or rather that he is Will Riker, just one who lived a different life. But what doesn't quite work for me is the end of the story reveals why Tuvok and Nog were chosen for this mission: the assembler of the group thought they were both the kind of people who might put ends about means and be willing to countenance extreme measures in bringing down Bacco's assassins. This actually makes sense; the novel highlights Tuvok's time as a spy in the Maquis (where I feel certain he must have done some morally dubious things), but I kept thinking of "Prime Factors," where Tuvok is the one who breaks Janeway's orders in an effort to bring Voyager home. Nog has a pragmatic edge thanks to his Ferengi upbringing (seen in, for example, "Treachery, Faith, and the Great River"). But there's never a point where you think Tuvok or Nog might actually do something ethically dubious, and I wish there had been; I think it would sell the themes of both the book and the whole series better.

Vale's subplot-- she's made brevet captain of a medical transport as an excuse to get her near the prison where Bashir is being held-- is the least complicated of these, but it works well enough. Like Tuvok and Nog, the book mentions the idea that she's actually sympathetic to the Ishan/Velk political axis. There's a lot of characters in this book who are, and unlike in A Ceremony of Losses, they're not all obviously evil. Much moreso than in the last book, I understood how Ishan could have had some actual political success... though I do think The Fall would have benefited if previous books had laid this groundwork more.

My favorite part of the book, though, is really nothing to do with the thriller elements. There's a bit where the Titan crew discover a piece of sensitive information has been transmitted as an encoded holo-matrix. If you know the right code, it will tell you want you need to know; give the wrong one, or try to de-compile it, and it will delete itself. (Shar actually used a similar method of contacting Bashir in Ceremony.) The Titan crew has the most delightfully Star Trekkian solution to this dilemma: if they uplift the program to sentience, they can reason it into giving them the information they need! It's so out there I love it. 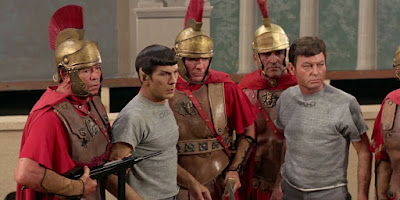 
I read Destiny-era Star Trek books in batches of five every few months. Next up in sequence: The Fall: Peaceable Kingdoms by Dayton Ward