Are you Down for a Cross?

I actually don't think I've ever really blogged about it, but I've been a crossword aficionado for about a decade now, ever since one day at lunch during a lull in the conversation an older graduate student named Jon slammed down the student paper and said, "This is boring, let's do the crossword." Doing the crossword as a group became a daily ritual; the UConn Daily Campus syndicated the LA Times crossword puzzle, and we would all crowd around it, shouting answers at whatever poor sap happened to have the pencil.

The LAT puzzle, like the much more famous New York Times, increases in difficulty across the course of a week: Monday is easiest, Saturday the hardest. (Sunday puzzles are bigger than dailies, but if you control for that, in terms of difficulty, they're comparable to a Thursday.) I remember the sheer sense of triumph the first time we completed the Friday-- and then we looked up the the answers online and realized that due to a misprint, we had actually completed a Saturday puzzle! (The Campus was perpetually printing the wrong day's puzzle, or printing it with the edge of the image cropped off, or at a resolution too low to read.)

(I would e-mail whenever there was an issue; no one ever answered my e-mails, but usually things would get better for a little while when I did. One April Fools Day, they put a note in the paper that said something like, "To the guy who always e-mails us about the crossword, try going to google dot com  and typing in 'crossword.'" Made it!)

In the summer, when there were no copies of the Campus to be had, I would even print it off the LAT website so we could do it together. By my last summer, we had got so good at it that doing a Monday as a group was pretty pointless, so we switched to doing them competitively.

Most of my close friends left UConn a year or two before I did, though I continued to do the lunchtime ritual. Once I left, I largely switched over to doing on my phone, on an app called Shortyz.

My sister Catherine got into it at some point; I remember visiting her in Philadelphia when traveling for a conference, and doing a Sunday with her, and then for a couple weeks, texting about our crossword accomplishments. (I would brag whenever I finished a Saturday or Sunday with no hints.) 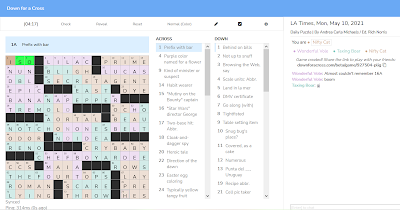 Just over a year ago, a post on r/crossword alerted me to the existence of Down for a Cross, a web site for collaborative crossword solving. You can select a puzzle, or upload your own .puz file, and it generates a unique link you can use to solve the same puzzle simultaneously.

After poking around with it for a bit, I sent one to Cat. This was April 11, so early in the days of lockdown: we were all trapped at home with nothing to do. It quickly became a daily ritual that after I put Son One down to sleep, we would do the NYT puzzle together. (I would still do the LAT on my own, except for the weekend puzzles.)

My sister's desire to do puzzles somewhat outstripped mine, so she soon looped in our sister-in-law Jess, so now all three of us do the NYT together, and then they do some more besides that. Though we've missed some evenings for whatever reason, we always catch up on that puzzle later, meaning I-- who felt I had kind of stagnated with what the LAT has to offer-- now experience the complexities of America's premier crossword puzzle. We used to hate rebuses, but have quickly come to appreciate their unique challenges. (In fact, doing the NYT every day has pretty much sated my crossword desires, so I never do the LAT on my phone anymore.)

Crosswording was, I think, designed and is primarily thought of as a solo activity. But for many years, the crossword was a social act for me-- the joy of breaking through a difficult puzzle as a group is a big part of what I used to get out of it... and then did not for many years. Lockdown has definitely been tough in a lot of ways, but I am thankful for the weird ways it has occasionally brought us closer together.