The Secret Origin of the Salisbury Steak

Everyone knows the origin of the graham cracker, right? Invented by a nineteenth-century Connecticut* minister who thought that an all-vegetarian diet would tame unhealthy libidos. (Well, supposedly invented by him. They may have just been named for him because of his promotion of unsifted wheat flour over sifted white flour.) Anyway, I was in the hospital this weekend for some digestive tract issues, and it made me recall a recent discovery: the other nineteenth-century food item invented as a medicinal cure that became a legit delicious food.

I was reading The Beth Book: Being a Study of the Life of Elizabeth Caldwell Maclure, a Woman of Genius, an 1897 British novel by Sarah Grand, a month or so ago. Beth is tending to a sickly fellow lodger, who says that he'd like to switch treatments and "try Salisbury." Beth reads his book on Salisbury, and a footnote explains, "The American physician James Salisbury, believing that human nutrition should be meat-based, introduced the 'Salisbury steak' (beef deep-fried with onion) in 1888. He recommended that patients should be given this three times a day" (520n102).

Well, this was a discovery! I'd had more than my fair share of these as a child:

...and never had I known that I was ingesting medicine! (TV dinners were an occasional special treat for me. Plus I worked at a grocery in high school and would eat them for lunch.)


Dr. Salisbury, like many people before and since, believed that food was the key to health and that certain foods could cure illness, especially of the intestinal variety. He tested his theories during the Civil War, treating chronic diarrhea among Union soldiers with a diet of chopped-up meat and little else. After 30 years of research he finally published his ideas, setting off one of the earliest American fad diets.

He perfected the food in his 1888 book, The Relation of Alimentation and Disease, saying that you basically had to avoid vegetables at all costs in order to stay healthy. How did he know this? Real scientific research:

But, Salisbury, beans are good for your heart! You kind of have to admire(???) a guy who, in his solitary hours, is like, "I'm gonna eat nothing but baked beans if it kills me!" He might have been getting a little too solitary if you ask me. He tested his only-one-food principle on himself with various foods for over two years, then started all over again with a group of seven people. Once he fed them only baked beans and coffee for nineteen days! I mean, I love baked beans, but I think I'd be going nuts after that, too.

Then he did it with two thousand pigs, because pigs you can go "on to the death point, as could not be done with men." (I guess some of the guys in his group were wimps, huh? Who isn't willing to eat nothing but oatmeal porridge for thirty days in the cause of science?) I'm not sure why the idea of a diet where you ate more than one food never occurred to him, but he does have that sort of delightful Victorian scientific monomania.

The cover page of The Relation of Alimentation and Disease is a real treat, by the way, not in the usual nineteenth-century sense of a crazy title, but check out that author attribution-- not to mention what someone wrote on the copy that was digitized by Google Books: 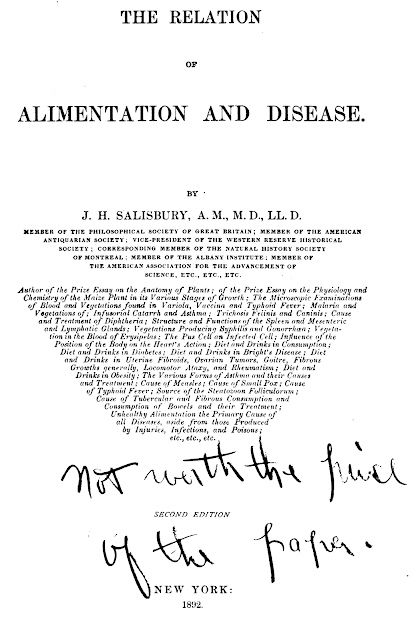 I guess if you're gonna do dubious science, wow 'em with your credentials.

In the The Beth Book, three Salisbury steaks a day saves Beth's friend's life. I don't think it would save mine, though; I'm supposed to be on a low-fat diet, and this seems exactly the opposite! 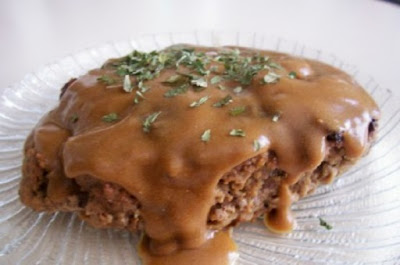 I'm not sure I've ever had a Salisbury steak outside of a TV dinner, though. It seems like the kind of thing Bob Evan's or a classic diner would do, but I can't find any evidence of that. Sokolowksi's University Inn in Cleveland does them, though, so if I ever go back there (and get better), I will have to get one!

* Second on the list of great Connecticut culinary contributions, after the steamed cheeseburger, of course.
Posted by Steve at 8:30 AM