Review: Nemesis: The Impostors by Ivan Brandon and Cliff Richards 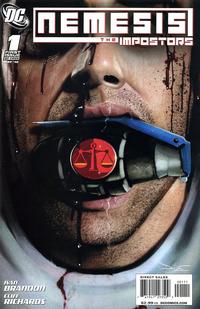 When I read the various Final Crisis Aftermath titles a couple years ago, my favorite was Escape, which had the character of Tom "Nemesis" Tresser trying to escape Brother Eye and the Electric City, home of the new Checkmate Global Peace Agency. I said that it was the only one FCA story "that doesn't feel like the writer is trying to make something out of Grant Morrison's leftovers, that feels like its writer actually has his own story to tell" and though I found it confusing (it has conspiracies and duplicates and time travel), "just enough explanations were provided to make me feel like there was a logic to this, and to intrigue me to read on. There was a purpose to everything that happened, one that stems from the events of Final Crisis and has repercussions for the future." 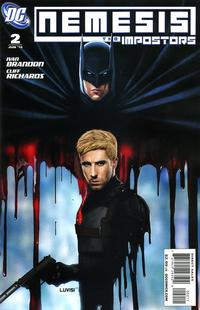 Even though one of Grant Morrison's purposes in Final Crisis was setting up new concepts for other writers to play with them, and DC's purpose in the FCA tales was apparently to do that playing, none of them really took off. There were no more Human Flame stories after Run!, no Super Young Team stories after Dance, and almost no more Tattooed Man stories after Ink. Escape did, however, receive a follow-up, in the form of a four-issue Nemesis miniseries called The Impostors. Having escaped from the Electric City, Tom Tresser tries to take down the Council (apparently his recurring nemesis from his original 1980s appearances in The Brave and the Bold), but has to tackle with Batman and possibly the Joker in the process. It was never collected, so I couldn't get it from the library, but I liked Escape enough to buy the single issues off eBay. 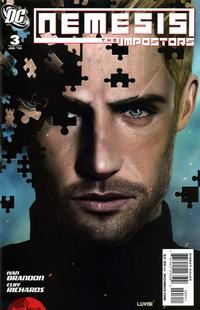 As I quoted myself above, I enjoyed Escape and liked the future it implied. Only now, eighteen months after I wrote that, I have no idea what I was talking about. The Impostors did nothing to remind me what I was talking about back then. I was so confused reading this book, and not in a good way. Why exactly did Tom suddenly want to take down his old enemies? Why did he keep seeing Brother Eye and the Electric City? What did the stuff I did dimly remember from Escape actually have to do with anything? And what the heck was up with the ending?

Frustratingly, the story ends in such a way that indicates more is to come-- and that more needs to come, because The Impostors makes so little sense on its own. However, The Impostors was Tom Tresser's last appearance, and then the universe was rebooted. I bounced off this story completely, which is a shame because of how much I liked Escape. I would read more in the vain hope that something might make sense again, but I don't even have that option. 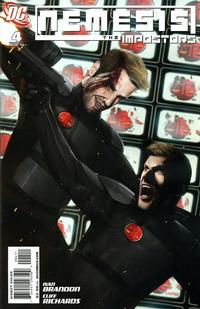 One thing I did like: Tom is pretty paranoid in this story, and justifiably so, and his paranoia is amped up because he doesn't believe the guy claiming to be Batman is actually Batman because his body language is wrong. This is because The Impostors takes place after Final Crisis-- so Bruce Wayne is unstuck in time, and Dick Grayson is the new Batman. It's a nice little touch.