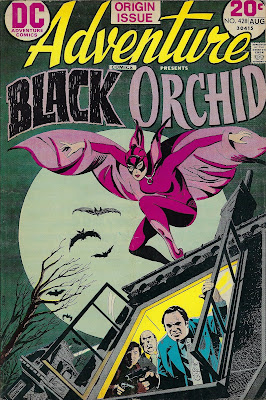 Over seven years ago now, I read Neil Gaiman and Dave McKean's Black Orchid miniseries, which reinvented the character of the Black Orchid for 1980s. As often happens when I read updates of DC characters, it made me want to read the original version, and I eventually acquired all the major pre-Crisis appearances of the Black Orchid, mostly in Adventure Comics and The Phantom Stranger. (Adventure Comics vol. 1 #428 might be the most expensive single issue I have ever purchased.)

As originally conceived by writer Sheldon Mayer and artist Tony de Zuñiga, the Black Orchid has an interesting, unusual conceit. Her first three stories in Adventure Comics follow similar formats: someone is plotting something dastardly, but he gets warned off by the mysterious superhero Black Orchid who has the powers of flight, superstrength, and invulnerability. He realizes Black Orchid must a woman privy to his plans, and acts on his suspicions, but it turns out she was a woman he overlooked because she disguised herself as someone close to him. Rinse, repeat. The reader never learns Black Orchid's civilian identity; the viewpoint character is always the criminal. 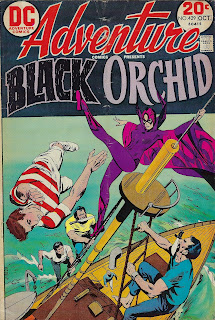 Pair this with the lush artwork of de Zuñiga, and you have something special. (I always liked his work on DC's horror comics from around this same time period.) My favorite of the original three stories was the last one, "The Anger of the Black Orchid" in Adventure #430, where she takes on a skeevy nightclub owner running an extortion racket-- dark city streets, beautiful women, and unscrupulous men make the perfect venue for the Black Orchid's retribution. Like a lot of DC features of the time, it's pretty clear that these stories do not take place in the "DC universe"; people are amazed at the Black Orchid's powers, saying it's like something out of comic books. This definitely isn't a world where the Justice League is buzzing around!

After her brief run of fourteen-page lead features in Adventure (July/Aug.-Nov./Dec. 1973), the Black Orchid was transferred to Phantom Stranger vol. 2, where her eight-page back-up feature appeared eight times across issues #31 to #41 (June/July 1974–Feb./Mar. 1976). Some are written by Mayer, but the rest are by Michael Fleisher (with Russell Carley on "script continuity"); de Zuñiga draws the first one, with Nestor Redondo and Fred Carrillo doing the rest. These stories, even the ones Mayer or de Zuñiga worked on, show a lack of understanding of the Black Orchid character. Suddenly she's a well-known public figure that criminals impersonate convincingly in two different stories; suddenly she has the power to hack computers with X-rays and to assemble androids to help in her counter-crime plots. 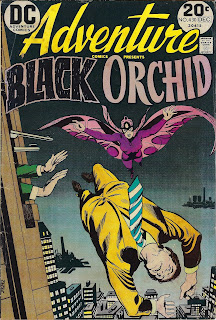 The very first one, "Island of Fear!", was decent, though it suffered for its shorter length, but all the ones after that I found disappointing or misjudged. The Black Orchid ends up folded into the DC universe as well. No DC characters appear, but they are acknowledged; in #41, for example, Black Orchid jokes about showing off her super-strength because it will attract the Justice League's attention.

That was it for the character as a regular feature until Neil Gaiman; Phantom Stranger was cancelled with #41. I enjoyed the run in the way I enjoy a lot of the more standalone DC stuff from the 1970s; I don't think reading a ton of it one go would hold up, and I'm not sure a series about a character we're always on the outside of would be sustainable in the long run. But reading it in small amounts is an enjoyable dose of something different from the normal superheroics, especially at the hand of master illustrators like de Zuñiga and Redondo. 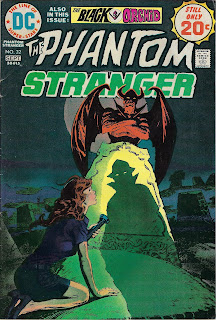 The character did have two significant pre-Crisis guest appearances, which I also tracked down, in The Super Friends #31 (Apr. 1980) and Blue Devil Annual #1 (1985). There wasn't much continuity within the original set of Black Orchid stories, so I was pretty surprised when her appearance in Super Friends turned out to be a direct sequel to her final storyline in Phantom Stranger #38-41; the same villain comes back for another crack at Black Orchid, but inadvertently attracts the attention of the entire Justice League. It seems strange for a cartoon tie-in series aimed at kids to draw so directly on a story that appeared four years prior, but it is by continuity nut E. Nelson Bridwell, so there you go. It floats but discards the idea that the Black Orchid is a Kryptonian, and I thought her flying into space with Superman was going a bit too far with what the original run had implied about her superpowers.

On the other hand, I did enjoy the Blue Devil Annual story a lot; I really should read that series someday (I have previously only read its crossover with The Omega Men). Her role is small, but fun, in a story of several DC mystic characters teaming up to fight Felix Faust. Both Madame Xanadu and the Phantom Stranger promise they have given the real origin of the Black Orchid, one ripping off Daredevil ("struck across the face with a tumbling bouquet of orchids [...] [that] had been saturated with fallout from a bomb test") and the other Spider-Man ("a bouquet of orchids was accidentally irradiated! [...] Paula stumbled-- and accidentally pricked her fingers on the thorns of those selfsame stems!"*). It pokes fun at every character concerned, which I gather was the modus operandi of Blue Devil in general. 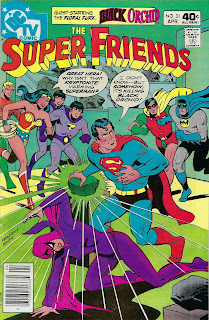 Gaiman and McKean, of course, used their series to kill off the Black Orchid, give her an origin, and resurrect her in a new body; she was said to be a plant-human hybrid, and after their story, there was an ongoing series about the more obviously plant-like new incarnation's adventures. I liked Gaiman and McKean's story on its own merits, but I'm wondering if I would have found it as satisfying if I had read the original adventures of the character first. Her charm is her femme fataleesque mystery, I think, and making her a bizarre sci-fi creation kind of takes away from that. I'm glad I tracked these stories down to find out how she originally was, even if there weren't any real answers to be found.

* I instantly objected that orchids don't have thorns... and one panel later, so does Madame Xanadu.
Posted by Steve at 8:30 AM