There are things that you just know as a fan of something, things you picked up from fan cultural osmosis: Spock was the first Vulcan in Starfleet, Uhura's first name is Nyota, transwarp drive failed after The Search for Spock, Captain Pike commanded two five-year missions on the Enterprise. I don't know where I picked these things up from, but somehow I knew them.

People call these things fanon: "fan canon." Though given the adjective form of canon is canonical, surely they should call them fanonical... no? Okay. 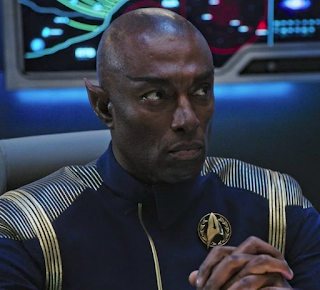 Fanon is often contradicted, and then people get mad about it. Spock being the first Vulcan in Starfleet was contradicted by the appearance of T'Pol 110 years earlier on Enterprise, though she only joined Starfleet in season four. But you can squint and argue that she only joined the Earth Starfleet, not the Federation one that came later. But what you should really note is that:
Sometime, though, fanon is confirmed. Uhura's first name was given as Nyota in a 1982 book, and used in most books since then. However, it was not used on screen until 2009, in the first reboot film!

Recently this happened again, and I was surprised to realize that the thing to become canon was not in fact already canon. Season 2, episode of Star Trek: Discovery, "New Eden," mentions "Federation Standard" as the language the main characters are speaking. Something I did not realize until logging onto the Internet after watching was that it was the first canonical reference to Federation Standard. But I just knew-- had always known-- that the language was called Federation Standard.

A little bit of research, and I'm still not exactly sure where the term came from. It was being used in novels in the 1980s, which is probably how come I assimilated it.

What I wonder, though, is if the writers of Discovery actually knew what they were doing when they used the term. Did they know they were "canonizing" a long-standing piece of fanon at long last? Or did writers Vaun Wilmott and Sean Cochran think, like me, that the term already was canon, and thus inadvertently made it so?
Posted by Steve at 8:30 AM