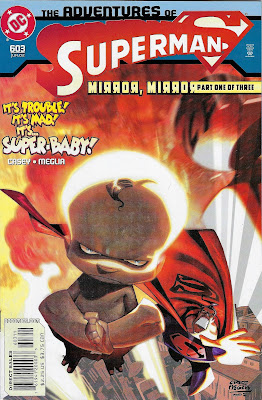 Before we get to the next Super titles crossover, Return to Krypton II, we have two multi-issue Adventures of Superman storylines from Joe Casey: Cult of Persuasion (#601-02) and Mirror, Mirror (#603-05). Cult of Persuasion picks up from a prologue in #598, as a laid-off power plant worker has taken up the mantle of the Persuader, one of the long-time members of the Fatal Five, enemies of the Legion of Super-Heroes. Parker, the new Persuader, has some superpowers thanks to a mysterious benefactor who wasn't really adequately explained, and uses to raise an army and go after Superman and the Daily Planet.

The first part is mostly set-up: Superman is in action for only a tiny bit of it, a short sequence where he saves a space shuttle from a collision with a satellite. Instead, we have a lot of Clark Kent, as he investigates Parker's escape from prison, complete with a return appearance by the impressionable clerk Lois wooed secrets out of back during Prelude to War! (#593). It's nice and likeable stuff, actually; I like seeing Clark doing some investigation and journalism. The second part, on the other hand, is one big action sequence, but again, I liked it. I mean, I wouldn't put it in my top ten or twenty Superman stories, certainly, but Casey has nicely settled into the title at this point (#600 was his one-year anniversary), and knows how to write an engaging action sequence. There's a lot of emphasis on Superman's thinking during the fight, as he strategizes against a surprisingly powerful opponent, and that keeps it interesting, as opposed to what some of the other Super title writers do, and just have him punching villains again and again.

There's also a subplot about Clark and Lois. Back in #600 we saw that she had been traveling the world with her mother to get space from him, but Superman could still keep tabs on her from anywhere; in part one she calls and leaves a message asking for space. Part two has an epilogue set two weeks after the main story, by time which she has returned, but they're still not certain how things will go between them. I liked it when Lois laid out what she wanted: "Our life together-- it's got that fairy tale thing going for it. Sometimes I'd get caught up in it. One thing mom taught me... [...] real life isn't a fairy tale. And I don't want to live that way anymore. I want a real life. And that means dealing with the bad as well as the good." Only I'm not entirely certain what that means on a practical basis, and I suspect I might never know, as most of the Lois/Clark developments seem to happen in the other Super titles, and Casey's writing just reflects the status quo changes that some other writer(s) is making.

Pete Woods fills in on just these two issues as penciller. He seems to be imitating the departed Mike Wieringo to an extent, because it's not quite his familiar style from later comics of his I've read, but he has always been a good, solid artist, with clear storytelling and good emotional expression. It would have been nice to see him step in regularly, but I'm happy with Derec Aucoin (who will take over soon with #608).

(Incidentally, Clark tells Lois that the Daily Planet "office got trashed once or twice while you were gone...", fortuitously lining up with the events of The Big Noise.)

However, I was less into Mirror, Mirror. It's a sequel to Grant Morrison and Frank Quitely's JLA: Earth 2, which I've never read. A super-baby materializes in Metropolis, and Superman has to contain its unintentional destructive power. Soon Ultraman, Superwoman, and Owlman (the antimatter universe's Superman, Wonder Woman, and Batman) all turn up to argue over it. The story goes round and round in circles as the characters argue and fight, fight and argue, and never really had a hook that got me interested. Carlos Meglia's art was often unclear (when he was actually drawing it; there were a lot of extra artists), and in the end, there was a surprising amount of technobabble. A surprising dud from Casey at this point.