Joe Casey's Adventures of Superman #597-600: President Luthor and Other Celebrations 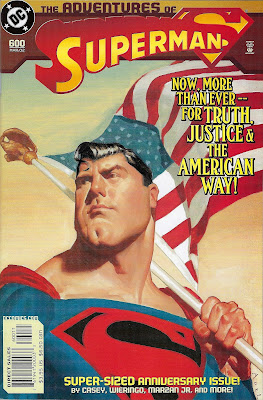 In early 2002, the Super titles changed their approach. Though there would still be stories that spanned all four series, they would be less frequent. (I think there are just three more during Joe Casey's time on Adventures of Superman.) Issues #596-605 therefore make up our first stretch of any length of issues just by Joe Casey (though #597 is a tie-in to a Batman event, Joker: Last Laugh), allowing his own writerly voice to begin to emerge; today I'll be dealing with the first half of that run.

In the better issues, Casey seems interested in probing the limits of Superman's power. Not in terms of finding bigger physical threats, but in terms of figuring out what he can't do or what he doesn't want to do. The two best issues are therefore "Borba za Zhivuchest" (#599) and "A Lex" (#600). The former opens with a sinking Russian nuclear submarine; Superman flies in and saves it so fast that no one even sees him. Some time later, he follows up with the captain of the submarine, Gussev, a man whose job might be sailor, but whose identity is farmer. Thanks to a bit of heroism he pulled during the disaster, Gussev is now dying. Of course, Clark Kent emphasizes with a man who thinks that a farm is the best place on Earth.

I think it's probably not very surprising how things play out, but it is touching. Superman admits to Gussev that he is from a farm in Kansas: "it's the place where I have always found peace... it is where my family lives... that land is my heart as well..." The captain talks about being a farmer shaped his worldview: "We work the land... it becomes a part of us. And so... we see the Earth as a whole... we don't see borders..." Superman can't save this man's life, but he is able to do a couple things for him as he dies. I like it when Superman stories emphasize that being Superman isn't just about fighting bad guys, but about helping little guys in all sorts of ways. My preferred Superman is the one who can take a day out to keep a man company as he passes away.

I also really enjoyed "A Lex." President Luthor goes missing, and Vice President Pete Ross asks Superman for help. Superman, of course, doesn't want Luthor to be president... but Pete says that Luthor really cares about America. Superman knows that the right thing for the country is to bring him back. Or does he? Casey rotates between Superman searching for Luthor, Clark visiting Lois to discuss his doubts, and a mysterious new criminal leading the downtrodden of Metropolis in an uprising against corporatism.

I like that it shows Superman as someone who struggles with doing the right thing... not in that Superman wouldn't do the right thing, but in that it's not always clear what the right thing is. I also like how the story ends; the new criminal is Luthor, of course, wearing a toupee and without his memory. Superman saves him, partially thanks to Talia al Ghul, who's running LexCorp while Luthor is president; she gives Luthor his daughter, shocking him back to normal. (Lena is an infant here, but last time I saw her, in Our Worlds at War, she was a Brainiac-enhanced adult; I guess this is one of those things you just gotta roll with in comics.) At the end of the story, we find out that Luthor liked being a sewer-dwelling supervillain: "I almost had it... I was free...! Wealth... political power... nothing can match the intoxication of... that freedom... Why couldn't you just leave me alone...?!" We're just about a year away from Public Enemies, where Luthor ditches the presidency to wreak havoc in a battllesuit. I didn't like that turn in that storyline when I read it back in the day, but we're clearly setting it up here.

There's also some references to the Ricard Donner Superman films; this kind of thing can be overdone, but here it was a nice touch, reminding you of what another kind of Luthor could be at a time where Luthor had been a "respectable businessman" for almost two decades of publication.

On the other hand, Casey is weaker when he attempts straight action stories. In "Rubber Crutch" (#597), Luthor is infected by Joker venom and goes mad (remember when beginning your re-election campaign only one year into your term was a sign of madness?); Superman has to stop him from destroying the Earth with nuclear launch codes. There's some okay political jokes, but it's all pretty perfunctory otherwise.

Issue #598 is the prologue to Cult of Persuasion, a storyline that will appear in #601-02. I found it confusing and undramatic. Apparently removing the futuristic Brainiac 13 technology from Metropolis increases the use of automation? Seems counter-intuitive. It's not really clear to me why a group of disgruntled workers decide to pattern themselves after a member of the Legion of Super-Heroes's Fatal Five, even if footage of Superman fighting with them is replayed on television. Hopefully the full storyline is better.

In addition to all of this, Adventures #600 has some backmatter in honor of its milestone status. (Note that the title being celebrated here was actually just called Superman from issues #1 to #423; in January 1987, it was retitled The Adventures of Superman so that DC could have a new Superman #1 but not lose the numbering of the original title.) There's a page of three "comic strips," the conceit being we're reading a single daily installment of three different newspaper comics: The Daily Planet, Super-Commander Kent—In the 7th Millennium!, and The Most Bizarro Case of All. They're cute glimpses of what could be-- I want to read an actual story where Harley Quinn goes undercover at the Planet and Jimmy Olsen falls for her-- and worth it for the art. Work by Dave Gibbons and Tim Sale is always appreciated!

Finally, #600 contains a set of pin-ups covering key moments in Superman's life. Pin-ups often feel like padding to me, and this is a below-average set, alas, but there are still some nice ones. J. H. Williams & Mick Gray's and John Cassaday's were the two best.

Issues #598 and 600, by the way, mark the last work of regular penciller Mike Wieringo on the title. I don't think I ever said much about his work in this reviews, but I liked it. He was at his best when Casey was writing Superman as heroic and/or uplifting. On the other hand, I don't think he was always suited for Casey's take on the darker sides of the character. Just within this stretch, for example, I thought he was a good fit for #600, but I would have put him on #599 as well, instead of Derec Aucoin, whose sensibilities seem better suited elsewhere.