Joe Casey's Adventures of Superman #595: Our Worlds at War: Casualties of War! 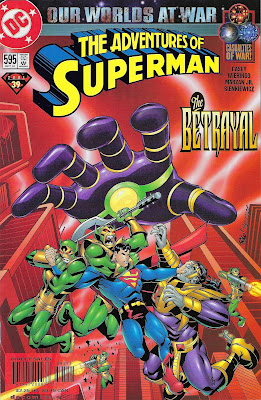 The last third of Our Worlds at War, "Casualties of War!", kind of thuds to a close. The middle third of this storyline was definitely the best part. In theory, things should be winding up, but instead, the story piles on unnecessary and seemingly un-thought out twists and complications that it has no time to explore the repercussions of.

At first, things get off to a good start. "The Red Badge of Courage" (Superman #173) kind of picks up from the end of All-Out War!, with Superman now voluntarily working for President Luthor (though at the end of All-Out War! he seemed very resigned and submissive, whereas here he's all confrontational), and still awkward around Lois. Superman leads a space expedition to destroy Imperiex with some American soldiers and Strange Visitor (back for the first time since Adventures of Superman #592), and this has some decent moments, though I thought it was a little cruel for the erstwhile Sergeant Rock to lecture Strange Visitor the way she did. She clearly did not ask for any of this, of course she doesn't know how it works!

At the end of this issue, though, things begin to spiral out of control. Imperiex is destroyed, but Warworld (from all the way back in the first issue of this storyline) reappears and absorbs Imperiex's power. Brainiac 13 somehow fires on Apokolips using LexCorp Towers (though the art here in confusing; when I first read the issue I though Warworld was firing on LexCorp Towers and on Apokolips), and Darkseid declares war on Earth, ending the alliance. I'm not sure why Darkseid is so dumb in this moment.

Superman goes to Apokolips to stop Darkseid, but is somehow surprised to learn Warworld is at fault even though we all saw it happen. Darkseid's son (?) Grayven says he's taking over Apokolips, but it's the worst conceived coup ever because Darkseid just shoots him with his eye-beams and throws him into a boom tube. Like, what did he think Darkseid would do?

Then things accelerate even more. The last two Super titles issues here, Superman: The Man of Steel #117 and Action Comics #782, are more exposition than story, piling explanation upon explanation about who Brainiac 13 is, what his plan is, what Imperiex (not actually dead) is up to, how they are going to be defeated, and how they are actually going to be defeated when that doesn't work. So much stuff happens in these two issues that it mostly has to be explained in narration boxes, and loses all of its potential impact. Maxima breaks the alliance (why?), Steel comes back to life, Wonder Woman volunteers to throw Paradise Island at Warworld, Jimmy Olsen has some kind of computer powers, the Amazons worship Darkseid to revitalize his depleted powers, the heroes decide to send Warworld back in time to jumpstart the Big Bang(!), and more. It's all a bit too much, and a bit too messy to be enjoyable.

A lot of things set up in the first third, "Prelude to War!", never really came into fruition. Like, why did the population of Metropolis have to be evacuated into space?

As always, there are a few issues of other titles sprinkled in here. Three star Young Justice and its members (Young Justice #36, Impulse #77, and Superboy #91). They were running medical aid missions during the space battle when they got sidetracked and crash-landed on Apokolips; the three issues follow their attempts to stay alive on the most inhopsitable planet in the universe. These are both fun and dark at the same time; I was surprised how much I liked them. I've never read any Young Justice before, but it's a group of well-meaning but often-at-odds characters trying to do their best, but often doing their worst, so of course I enjoyed them. The Superboy issue was particularly good (showing what's beneath his 1990s "attitude" as he writes a letter home from the war), but they're all good. The issues do feel pretty irrelevant to the big story, though, so I'm not sure why they're in here. I also wish the issue showing how they actually escaped Apokolips (Young Justice #37, I think) had been included, since as it is, their story just kind of stops, aside from a one-page appearance in the "Finale" epilogue.

There's also an issue of Wonder Woman again, "Amazons! Attack!"* (#173), which makes sense as some pretty dramatic things in Wonder Woman's life happen. It's oddly placed, though (I would have moved it to after Action #782), and doesn't really answer the big question I had after reading Man of Steel #117: why would Wonder Woman make such a dramatic choice as to destroy her homeland so easily? On the other hand, the mental powers of Aqualad (I think that's who this "Garth" fellow is) prove key to the final battle... but were never mentioned before it. It might have been nice to throw in whatever the relevant issue of the relevant title was beforehand.

The story is technically over before its final issue. "Finale" (World's Finest: Our Worlds at War #1) is an epilogue, showing various bits of fall-out: mourning for Aquaman (I forgot he died, actually), a ceremony for Wonder Woman's mother, Mongal (!) taking over Warworld, Strange Visitor's husband being mad, and so on. It's fine. Jeph Loeb's schtick of running famous speeches over the action of this series has lost its impact, though.

Overall, I feel like this series didn't live up to its potential. Too much spectacle, not enough humanity. The first third threw too many ideas out; the middle one had some great character hooks that never got followed up on because the last third got overtaken by the Big Action of the story. But it's possible the character moments will get followed up in Adventures of Superman going forward, which might redeem the story for me somewhat. We shall see!

ACCESS AN INDEX OF ALL POSTS IN THIS SERIES HERE

* Note the two exclamation marks, which most indexers on the Internet seem to have missed. "Amazons Attack!" is something else entirely.
Posted by Steve at 8:30 AM