Joe Casey's run on Adventures of Superman is one of those runs everyone in comics fandom speaks of in hushed, reverent tones, like Levitz and Giffen on the Legion, or Mark Waid on the Flash, or James Robinson on Starman. Although, it's not quite as widely spoken of as those; it has a more insidery feel than that. To the people that really know their Superman, Joe Casey is where it's at. Most noteworthy is the latter part of his run, where Superman never uses violence, allowing Casey to explore how Superman can be a superhero without throwing a punch.

Except, unlike all of those runs, it's never really been collected. DC has never released an Adventures of Superman by Joe Casey Omnibus, even though they've given the treatment to Justice League Detroit! I don't pretend to understand how DC's collected editions department makes decisions, but I suspect it's at least partially because for much of Casey's run, the four Super titles (Adventures, plain old Superman, Man of Steel, and Action Comics) were treated as one big title. Each week would see one of the four released, with stories rotating through them. So if you collect Casey's work, you have to collect a lot of other stuff too.

So, I spent some time tracking down the series on the secondary market. Casey's run ran from #588 (Mar. 2001) to #623 (Feb. 2004), minus a few fill-ins, a respectable three years that produced thirty-three comics. In addition, I'll be reading any crossovers with the other Super titles in full, sometimes in single issues, sometimes in collected editions (it just depended on what I could get cheaper). And I'll also be reading some other stuff from the era that seemed interesting to me (Traci 13, who I really enjoyed in Blue Beetle and Doctor 13, debuts in Action Comics during this time), as well as folding in Joe Casey's return to the era in his run on Superman Batman. The bottom of this post contains an index to the whole experiment that I'll update as we go. 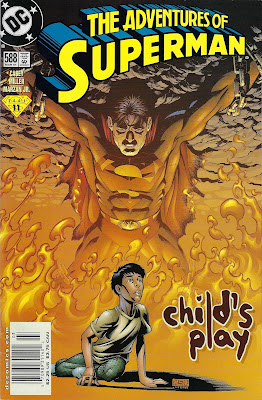 This is Joe Casey's first solo issue on Adventures of Superman. He was credited as co-writer on #587 with J. M. DeMatteis, but I skipped that, thinking it was mostly a wrapping up of storylines from DeMatteis's run. The story begins in medias res, with everyone in Metropolis, including Superman, acting nasty-- except for Lois. People are rude to each other on the subway, Superman uses his heat vision to graffiti a dam, Clark ignores Lois at work and hits on an attractive young Daily Planet employee. This comes from the era where Clark and Lois are married, and where (as I vaguely remember reading about), Metropolis is a literal city of the future, with flying cars and stuff like that. 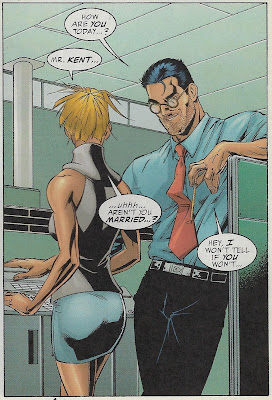 It's not explained why only Lois realizes something is going on. Soon she's contacted by a weird spirit lady ("I am the living bridge between the corporeal and the noncorporeal. I see... and am never seen.") who tells her the Clark that Lois sees is only a hollow shell; his real essence lies elsewhere. Lois manages to transfer herself into the "Nightmare Realm" through "Torquasm-Rao," which I'm guessing from context is some kind of Kryptonian mental/meditation technique. It turns out Superman is held captive by some thing called Satanus; he traded his soul for the city of Metropolis. Satanus is using the power of a wheelchair-bound boy named Cary to do all this. Lois and Clark free Cary, Satanus's realm collapses, and they all fly away.

I had thought at first that Casey's run was a clean start and this was all some in medias res stuff, but as it went on, I realized this was picking up from earlier issues; there was too much left unexplained otherwise. Looking at covers shows that this plotline goes back to at least #583. Oh well. I probably didn't want to read all that anyway.

It almost works on its own. I liked Casey's emphasis on Superman as the wellspring of decency in Metropolis; with him gone, the city itself becomes hollow. And I can see the seeds of what is to come in Superman stopping Cary from unnecessary violence in defeating Satanus. Casey and penciller Mike Miller also do a good job with the tone, which is slightly disconcerting. But there are too many unanswered questions and too much unrelayed exposition for this to read compellingly as a single issue to someone who's just come in. The rules of the "game" that let Superman et al. win seem pretty arbitrary, too.

Presumably the good stuff is forthcoming.

Reading Order and Index to Posts

Issue numbers are preceded by "triangle numbers" (which ran across the Super titles, so that you knew how to interweave the four ongoings) where relevant.