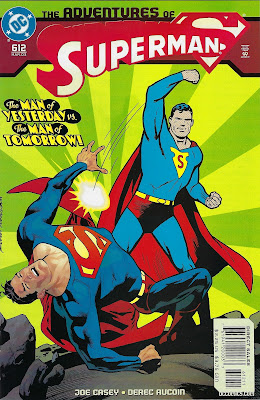 Back in my kick-off post for this sequence, I claimed that Joe Casey's run on Adventures had never really been collected. I later discovered that wasn't true: issues #610 and 612-23 were collected in two volumes under the umbrella title Superman: Superfiction in 2012... albeit only in French. So that's neat, but as a result, I'll be using "Superfiction" as my own umbrella title for the final set of issues of the Casey run.

With the exception of #613, #612-16 make up one large storyline. (Fun fact: Action Comics #801 takes place between Adventures #613 and 614, but as it is part of a five-part storyline itself, I'll be covering it there next week, slightly out of chronological order.) This storyline begins with "Authorized" (#612) where Clark goes to meet Ben Conrad, a Nebraskan journalist who inspired his own reporting. Conrad has retired from journalism to write a novel called Champion of the Oppressed, about a superhero who fights for ordinary people. Only, it turns out, this superhero has somehow come to life and is flying around wreaking havoc.

"Champion of the Oppressed" was, of course, the title of the original Superman story in Action Comics #1, and Ben Conrad's superhero is a riff on that original Superman, both visually and narratively; Adventures #612 recreates several beats of that original story, as the faux-Superman frees a woman from death row. As has been building in recent Adventures stories, there's an explicit critique of the direction of the 2000s Superman here; Ben Conrad says, "I'll tell ya... the more I researched Superman, the more I felt... I don't know. He's a bit too civilized, isn't he...? All that power... and look at how he uses it... wrestling with aliens and taking meetings on the moon doesn't exactly speak to the common man. He's just a bit detached for me."

It's a neat story. I like the riffs on Action #1, still one of the best, most vital Superman stories, and I like how artist Derec Aucoin and colorists Tanya & Rich Horie depict the visual clash between the two different Supermen. As he fades away, the "Champion" tells the real Superman, "Just... don't let these ideals... be forgotten... it's up to you... all of you... to keep up the fight..."; Superman says, "What you represent... is not inconsequential." It's a sad scene, well done. The story hints at something bigger, though, a group of mysterious black-and-white people called "the Hollow Men" incapacitating superheroes.

In "Truths Told in Super-Secret" (#614), Superman discovers a city of super-people hidden in a tesseract in Ohio, isolated since 1955, and still believing in the virtues of the Golden Age of Superheroes. But as he does, so do the Hollow Men, moving on from neutralizing the Ray and the Elongated Man, to attack a whole city of superheroes. "The Living Double of a Single Fiction" and "Three Camera Shoot" (#615-16) chronicle Superman's fight against these beings, who turn out to be from Ben Conrad's first novel. Superman defeats them in mental battle, giving Ben a chance to rewrite the ending of the story so that the Hollow Men neutralize themselves.

I found it anticlimactic. It's full of good concepts, but it feels like the story doesn't do much with them. Heroville is cool... but Superman discovers that it exists, gets an explanation, and that's it. The Hollow Men are neat, but the final conflict with them more peters out than anything else; Superman just acts very determined, and that does it. I think Casey is going for thematic depth here, with the Hollow Men as homogeneity against the color of Superman and his friends... but what does that mean? I'm not sure.

And, obviously, you can't tease me with just a couple panels of Elongated Man. DC's greatest detective deserves more than that!

#616 does contain a big moment that Casey's been building toward since at least #608, and surely earlier: Superman's declaration that he's a pacifist. I'm not sure what I think of it. It's an interesting reaction to the violence of the Champion: if he won't use violence to impose his ideals, he won't use violence at all. It promises some interesting storytelling to come: what kind of stories do you tell about a pacifist Superman? Interestingly, in-story, it's not a big moment-- it's a tossed-off comment by Superman while strategizing how to defeat the Hollow Men. (And it's massively belied by the actions Superman will undertake in the subsequent The Harvest storyline in Action Comics.)

The other story, "Valentine's Day Sale" (#613), is a cute Lois adventure where she discovers Flunky Flashman is marketing Superman's image and takes him down without Superman's help. I like Aucoin's art on this title in general, but felt this story called for a lighter touch than he could provide-- and besides, the way he draws Lois in this one is a tad skeevy. There are some nice callbacks to Superman: The Movie, though one wonders why there isn't a comics version of Superman and Lois's first date this story could riff on instead.