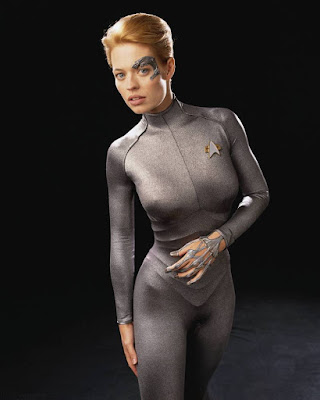 My mom was here a couple months ago, and we were talking Star Trek: Picard; I mentioned that Seven of Nine was going to be in it.

"Who's Seven of Nine?" asked my wife.

Whaaaat! But it was true, Hayley had no idea who Seven of Nine was. And then I realized that she had only seen one episode of Voyager; when we marathoned Deep Space Nine, I slotted "Caretaker" in chronologically to give her a sense of what the Maquis arc was all for. That was literally it.

And then I realized that Seven of Nine wasn't the only returning character who would be meaningless to her. I remain flabbergasted that they are actually getting Jonathan Del Arco back as Hugh. So I worked up a plan: essential pre-Picard viewing.

All of this would have to be guesswork based on the trailers and other pre-publictiy. Next Generation-wise, we would clearly need to watch "I, Borg" and "Descent" to give context for Hugh. But "Descent" doesn't make sense if you don't know the lore of, well, Lore. So onwards and backwards. For Voyager, we needed a sequence of key Seven episodes; basically the ones relating to her backstory. But I also wanted to get one in that dealt with her just as a character, not as a backstory.

So here's what we did:
It wasn't perfect. Partway through a Voyager episode, she asked me how Picard was de-assimilated if everyone was insisting it was so impossible, and I realized that she'd never actually seen "The Best of Both Worlds," just First Contact. And then during "Dark Frontier," she asked how the Federation first encountered the Borg anyway, which made me think "Q Who" might have been of use. But by this point I was getting Borged out.

But I enjoyed it. Do you know, I'd never actually seen "Brothers"? TNG is the one Star Trek I've never watched systematically, so there are still a large number of random episodes I've never watched. (I watched the original and early DS9 on DVD; all the shows from DS9 Season 5 onward and Voyager as they aired.) And I know I saw "I Borg" after "Descent," and "Datalore" much later still, so I'd never seen these eps in their proper contexts. 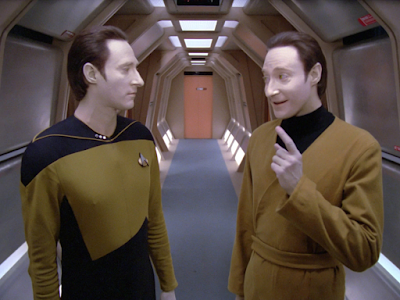 Brent Spiner is great as Lore (and Noonien Soong). Greater than the scripts, to be honest; I think he plays the character more ambiguously than he is on the page, with an honest affection for Data. The actual stories he's in range from dumb to sort of pointless. Like, "Datalore" requires a lot of improbable leaps to work (the crew is not very smart), and "Brothers" isn't even a story; Data diverts the Enterprise, Soong dies, and they leave, the end. And like a lot of TNG two-parters, "Descent" sets up a lot of stuff it never really pays off because the two halves were written months apart; part I keeps asking if Picard is willing to put the Federation's survival ahead of his ethics... a dilemma never even mentioned in part I; in part I, Troi tells Data that he'd still be Data even if he was experiencing negative emotions... in part II, Lore can press a button and turn Data evil! And c'mon, Hugh doesn't even see La Forge again! And Spiner barely gets to do his Lore thing. 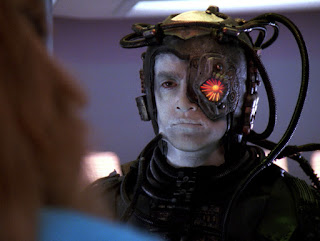 "I Borg" is the clear best of the lot, a great character piece for for a lot of the ensemble-- La Forge, Crusher, Guinan, and Picard all shine here. Del Arco is incredibly likable as Hugh. A good Star Trekkian piece of self-examination; how do we confront our own biases?

The Voyager episodes were interesting to watch, in that except for catching a few random ones on late at night during college, I've literally never seen a Voyager episode since the show went off the air. These episodes are now an astounding twenty years old!

They hold up. Voyager is an immensely inconsistent series, but "Scorpion" is probably as good as it got. Great action, great stakes/suspense. Surely the only episode to make a meaningful conflict between Chakotay and Janeway-- they both believe they are doing the right thing. Both the Borg and Species 8472 feel like real threats. And to go straight from "Descent" (1993) to "Scorpion" (1997) is a huge step up in quality of production in just four years. In terms of interior design, Voyager comes to life in a way the Enterprise-D just simulates. (Voyager was the first Star Trek show I watched regularly, and rewatching it, I realized that when I imagine the interior of a 24th-century Starfleet ship, I am always imagining Voyager.)

On the other hand, "Dark Frontier" is kind of dumb-- while "Scorpion" found a plausible way for Voyager to go up against the Borg and emerge intact, "Dark Frontier" can't do so again without defanging them. It's a pleasing blockbuster action film, but ultimately hollow. It's neat to see Seven's pre-Borg childhood, but the depth that was in, say, "The Gift" and "The Raven" is lacking.

I was glad I picked "Someone to Watch Over Me." Though it was more Doctor-focused than Seven-focused as I remembered, it's an episode that puts two of the three best actors on the show together, and makes something incredibly cute with them. How could you not love this, surely one of the best scenes in all Star Trek:

Jeri Ryan is excellent as Seven, something I didn't really appreciate when these episodes aired originally, determined to hate the character for her "sex sells" quotient.

We did note some continuity errors watching all these episodes back to back. According to Janeway in "The Gift,"


It took some digging through the Federation database, but I managed to find a single entry in the records of Deep Space 4. Her parents were unconventional. They fancied themselves explorers, but wanted nothing to do with Starfleet or the Federation. Their names were last recorded at a remote outpost in the Omega Sector. They refused to file a flight plan. Apparently, they aimed their small ship toward the Delta Quadrant and were never heard from again. 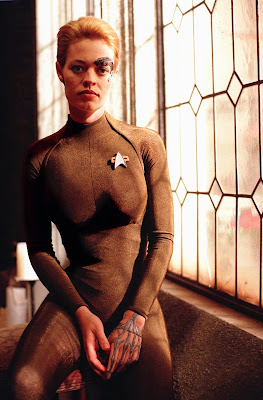 And then in "The Raven," Janeway says,


If you'd like to know more about your parents, there's information in the Federation database. [...] It seems they were fairly well known for being unconventional and for some rather unique scientific theories.

But in "Dark Frontier" (which also reveals that Tuvok and Seven somehow downloaded the logs of Seven's parents' ship off screen during "The Raven"), Seven's father says (in flashback),


The Federation Council on Exobiology has given us final approval. Starfleet's still concerned about security issues but they've agreed not to stand in our way. We've said our goodbyes, and we're ready to start chasing our theories about the Borg.

And her mother says,


We have deviated from our flight plan, crossed the Neutral Zone, disobeyed a direct order to return. Our colleagues obviously think we are insane. We have burned our bridges, Magnus.

They've gone from random explorers with no flight plans to people with "unconventional" but unspecified theories to Borg hunters with Starfleet-sanctioned flight plans and official endorsements from Federation organizations!

I don't think this is all a problem per se. I'm sure you can finesse it all if you want to, and this is just what tv does; as episodes need specific things to be true, they become true. One of the things that does work about "Dark Frontier" is the story of Seven's crazy, reckless parents, though it doesn't quite have the sense of trauma it originally did in "The Raven."

Anyway, this all kind of re-sparked my enthusiasm for tv Star Trek. I know it's all there on Netflix (and, one supposes, CBS All Access) but aside from rewatching DS9 with Hayley a couple years ago, I haven't watched much old Star Trek in a long time. We've gone on to watch some random episodes of the original, Next Generation, and Voyager since.

I'm excited to see what roles Seven and Hugh play in Picard (and the idea of them meeting seems quite neat!), and interested to see how right I got it. It'll probably turn out that I ought to have shown Hayley "Shades of Grey" and "The Disease"!
Posted by Steve at 8:30 AM