In theory, every couple months, I read five of the Star Trek books set in the "Destiny-era" continuity. In practicality, it's been a while; I finished the previous book fourteen months before I got around to this one. But, finally, here I am.

September 2384
I have to say, I don't really get what the point of the Cold Equations trilogy was. I mean, the Event is "the return of Data." But what is this story about? There's inklings of a theme breaking through. This is a story of parents: Soong and Data, Data and Lal, Beverly and Wesley, Flint and Rhea, even T'Ryssa and her dad. But I never felt like these aspects came together in any coherent way, and in books II and III, the parenting theme doesn't resonate with the plot at all. Why tell a technological thriller? (When I finished book II I felt like it was a "political sidestep away from the core idea of the trilogy" and hoped book III would save it, but nope.) Why tell a story about a massive machine entity destroying the galaxy? As I type this out, I can actually see the resonances-- the Body Electric wants to leave its mark on the universe, and that's kind of what raising a child is-- but if that's what was meant, you don't feel the resonances as you read.

That's possibly because you don't feel much of anything reading this book. The threat of black hole collision is too abstract, even if the characters occasionally look at the viewscreen aghast at the destruction of civilizations. There's a bit where the Enterprise crew all listen to transmissions of screams from a planet as it's added to the Abbadon black hole by the Machine, and I couldn't help but compare it unfavorably with the excerpts from transmissions of the Venette syndics in Brinkmanship, which made you sad over a bunch of people who weren't even characters in the book! I think a real sense of wonder could be conjured up... but this book doesn't do it.

I don't think Data has been handled well in this trilogy. Suddenly he's hell-bent on bringing Lal back to life, and he wants to settle down on Earth and raise her alongside Rhea. Where did this all come from? I know this new Data is different, but there's a core of Data-ness that's lacking-- where's Data's curiosity and wonder? Why would he want to settle down? I don't doubt that an author could get Data to this point, and I think that would be an interesting story, but Data starts the novel having made all his significant emotional decisions (except one, which I'll get to), and when we're in his point of view, it's all pretty blah. He's never deciding things, just doing things, mostly focusing on his captivity.

This book's depiction of AI feels very retrograde. Compare it to the lively, interesting, unusual AI character of Ann Leckie's Ancillary Justice that would come out just a few months later-- a distributed intelligence that operates simultaneously. Here, I mostly kept conjuring up a mental image of cheesy robots from a mediocre Doctor Who story. The secret Fellowship of artificial beings don't really impress.

No one really impresses, to be honest. One key plot advancement completely depends on an astounding bit of naïveté from Picard. Wesley has gone to get Data to help speak to the Machine (don't forget, the Machine is imminently going to cause the destruction of the entire galaxy). Data has been kidnapped by an evil member of the Fellowship; when Wesley brings the Fellowship and Data to the Enterprise, Wesley is unconscious (shot by the evil android), and the evil android won't let Data leave. So, they ask the evil android to go intervene with the Machine for them. Literally the only thing they know about this guy is that he shot Wesley and kidnapped Data. Does this seem like a guy to trust with saving the galaxy from an evil AI? After he leaves, when Data points out (they can communicate with him) that this is a bad plan, Picard's rebuttal is that "even if we had objected to Gatt making contact with the Machine, we would have no right to prevent him from doing so."

Picard, as we know, is famously principled, but I don't think even Picard is so stupid in his principles as to say (this is a paraphrase), "well, we can't stop this guy from potentially instigating a galactic apocalypse if it infringes on his free speech rights." (Guess what: the evil android decides that galactic genocide is a great plan, and does his best to help bring it about. Whoops!)

In my review of book II, I commented, "So far this trilogy is two for two on bumping off significant women characters," and then joked, "Who will buy it in book III?" Um, well, it wasn't a joke, I guess. Rhea McAdams was introduced way back in 2002's Immortal Coil as the new security chief of the Enterprise-E (one of many it had in First Contact/Insurrection-era novels); she and Data fell in love, but she was eventually revealed as a robot built by the immortal Flint (of "Requiem for Methuselah" fame), and she left. I think. There were around eleven years between Immortal Coil and The Body Electric, and now it's been eighteen. As I said above, part of Data's aspiration here is to settle down with Rhea once he revives Lal... I'll be honest, it's hard to care about this. I remember liking Rhea in Immortal Coil, but that was a long time ago; Rhea in this book is a complete nonentity, spending most of the novel off-screen, and getting just one real scene of her own, mostly focused on action.

At the climax of the novel, Data is put in a situation where he has to choose between letting Flint (who knows the secret to resurrecting Lal) and Rhea die. I think this is meant to be heartbreaking. But I didn't feel anything at all. One, as I said, I don't really get where Data's sudden Lal obsession came from, and two, who cares about Rhea? Nothing in The Body Electric convinces you that Data loves Rhea, or even really likes her. It's in the book, but like so much else, you don't feel it. I think it would have to be a very different book for this to work, a book actually built around Data's relationships with Rhea and Lal-- instead it's a book mostly about action sequences and stopping a super-black hole in which those relationships happen to put in cursory appearances.

The death of Rhea did do one thing for me, though. I have been wondering throughout this whole trilogy... why is it called "Cold Equations"? "The Cold Equations" is a famous hard sf story, written by Tom Godwin, but its essential design was created by editor John Campbell: a young woman has to die in order to demonstrate the cruelty of the universe. That is the role women play in the stories of men, and that is the role women play in this trilogy, time and again. 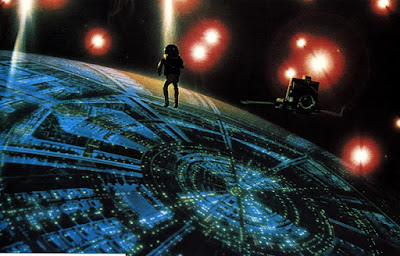 
I read Destiny-era Star Trek books in batches of five every few months. Next up in sequence: Department of Temporal Investigations: Time Lock by Christopher L. Bennett