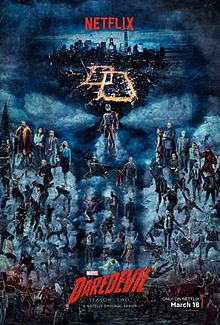 My wife and I just finished watching Season Two of Daredevil last week. (I'm not very good at binge-watching; I prefer a more measured pace of media consumption.) I found it the weakest season of Marvel-on-Netflix to date, which for me would be ranked something like 1) Daredevil Season One, 2) Jessica Jones Season One, 3) Daredevil Season Two. So each season of Marvel-on-Netflix is worse than the one before it, I guess.

There were a few things I didn't like about Season Two of Daredevil. The first was that the ninjas were deadly dull enemies. Season One works so well because Wilson Fisk was as compelling a character as Daredevil; the season was as much about his rise (and fall) as it was about Matt Murdock's. The first few episodes of Season Two were pretty promising, with their focus on Frank Castle as the Punisher, and I really liked Elodie Yung as Elektra. But as enemies the Hand were just deadly dull, and one finishes the season without actually understanding most of what was going on with them and their vague plans for malevolent evil. Also I didn't really care for Stick in Season One, and there was a ton of him this time around.

But really what I think I didn't like about it is that it veers too sharply away from what, for me at least, is the core premise of Daredevil. (I should note I've never read a Daredevil comic, I think.) That core premise is Matt Murdock, blind lawyer, protecting his hometown outside of the law when he can't do it from the inside, along with friends Foggy Nelson and Karen Page. The first season did a good job of this: the three of them worked together as a team to take down Fisk in their various ways.


The second season does not do a good job of this. Matt repeatedly makes terrible decisions as a lawyer and a friend, causing Foggy to land in hot water again and again, where Foggy has to bail himself out with no help from his supposed friend. Halfway through the season, I just wanted Matt to get killed by a ninja or something, and Foggy to form his own law firm, because Foggy was the character who I felt was doing his best to do the right thing. Now, this isn't necessarily bad writing in the sense that the show's creators didn't accomplish their goals: I think they want to break down the Matt/Foggy relationship in order to build it back up in Season Three (or, I guess, The Defenders). Only it's been broken down so much at this point that it would be impossible for me to believe that Foggy would invite Matt back into his life without me seeing Foggy as an overly dependent victim of emotional abuse.

But what appeals to me about Daredevil is that basic set-up. It's what John Seavey calls a "storytelling engine": a reasonably uncomplicated premise that generates potential stories pretty much endlessly. But Daredevil the television show basically never uses its storytelling engine.* There is exactly one point in the thirteen episodes of Season Two that revolves around someone coming to Nelson and Murdock with a case that gets Daredevil involved in some crimefighting, and the later points where the law firm angle is invoked are usually contrived. I like this set-up, yet the show is basically constantly abandoning it to tell giant, uninteresting stories about ninja death cults from the dawn of time, which is so far outside the premise of the storytelling engine as to be absurd. And, for me, uninteresting. I want to see Matt Murdock take down the thugs threatening his neighborhood. I want Foggy Nelson being a good friend and a great lawyer who helps his buddy out.† That's what's in the premise. That's how you got to me to show up; why are you giving me something that has nothing to do with it?


The problem here, the reason I will never get what I want, is that Daredevil is serialized. And not lightly serialized like Deep Space Nine was (or Veronica Mars or, I dunno, Wonderfalls), where a light arc runs through the background that rears up periodically. Each episode of Daredevil is just one-thirteenth of a larger story. (In the case of Season Two, a sloppily-constructed larger story.) Daredevil is too tightly serialized to permit a case-of-the-week approach-- but a case of the week is precisely what its storytelling engine has set up! The stories need to be big enough to fill thirteen episodes (that's like six movies!), and so the somewhat small premise of someone turning up at Nelson and Murdock with a problem that escalates until it needs superheroics gets left behind and forgotten in the face of NINJAS DOOMING THE EARTH. And the idea that Matt and Foggy and Karen are friend who work together gets left behind in the need to give each something very dramatic to do in the overarching plotline running through the whole season, such that the three characters barely seemed to interact in Season Two. (Except for bits where they needed to escalate Matt to a new level of jerkdom.)


So, as much as I did enjoy Season One of Jessica Jones, I suspect I will never get out of it what I really want, which is a procedural exploring the people on the fringes of the superhero world who can never quite enter into it all the way. That was the premise of the Alias comics that the show is based on, and which I loved, but the first season set that all aside in favor of a big story about Jessica's past with Killgrave, which was pretty good and so I was fine with it. But the second season, I suspect, will be no more procedural than the first, given the hints dropped near the end of the second. I want to see Jessica solving crimes involving runaway mutants,‡ meeting people pretending to be the Hulk's sidekick, and finding out what happened to D-list superheroes like D-Man. But that won't happen: it'll be about some government conspiracy that will dominate the whole season, and maybe one person will show up at her office door with a case, but if they do, it'll just tie into that big arc they're running. Season Two of Jessica Jones might be excellent, but the storytelling engine of Jessica Jones will go unused.

I will never get what I want.

* You can read Seavey's take on the specific storytelling engine of the Daredevil comics themselves here.
† Seriously, Foggy is the greatest. He's good at his job, he's got a soft heart, he just wants to help people in a terrible world, and he's always trying to scam free food. What's not to like?
‡ Though, in the Marvel Cinematic Universe they'd have to be Inhumams, and Inhumans are the "fetch" of Marvel Comics, so never mind then.
Posted by Steve at 8:30 AM