Before we get started on the Week of Wells, I have two reviews of recent-ish Doctor Who audio dramas up at USF this weekend: Nightshade featuring the seventh Doctor and Ace, and The Waters of Amsterdam featuring the fifth Doctor, Nyssa, and Tegan.


Experiment in Autobiography: Discoveries and Conclusions of a Very Ordinary Brain (Since 1866)
by H. G. Wells

Anyone who knows me knows that my interest in (obsession with?) H. G. Wells has only grown with the passing of time. There is not an important topic of the Victorian era that Wells doesn't have something to say to, I reckon. So it's only natural that my review of H. G. Wells's autobiography is probably among the longest book reviews I ever wrote. Thus, in honor of H. G. Wells's 150th birthday coming this Wednesday, I'm running my review of it in five parts, breaking it up to cover five semi-distinct topics. First off is:


§1
Wells in the Twentieth Century

Here in the twenty-first century I think we often consider the whole Victorian era to be of a piece: Charles Dickens coexisting with H. G. Wells, Fagin running from Martian tripods. But The War of the Worlds is closer to its own Cold War film adaptation than it is to Oliver Twist, and Wells lived more of his life in the twentieth century than the nineteenth, despite the fact that thanks to steampunk his early science fiction works define our imaginary of the nineteenth century. It's weird to read someone quintessentially Victorian discussing meeting Albert Einstein, Franklin Roosevelt, and Joseph Stalin, and having opinions on the women's suffrage movement and Karl Marx.

Perhaps weirdest of all is in his discussion of Hitler, who he first brings up when covering his life at age thirteen. He describes Hitler as "nothing more than one of my thirteen year old reveries grown come real. A whole generation of Germans has failed to grow up" (75). In fact, his fantasy worlds at thirteen strongly resemble the kind of future-war fiction Wells skewered in The War of the Worlds and The War in the Air: "I was simple even in victory. I made wise and firm decisions, about morals and customs and particularly about those Civil Service Stores which had done so much to bankrupt my father. With inveterate enemies, monarchists, Roman Catholics, non-Aryans and the like I was grimly just. Stern work--but my duty...." (75)

This reminds me of the ends of novels like Angel of the Revolution, where the future-revolutionaries have selflessly taken on the burden of murdering millions to make the world a better place, and then they lay down a set of new laws, one of which is always something oddly specific that makes you think it must have had personal repercussions for the writer, like one of the Seven Laws for All Humankind being about landlord-tenant rights. I've often drawn a connection between the revolutionary impulse of books like Angel and Hitler, so it's nice to see Wells himself draw the same one. I should note that, as I said in my discussion of Little Wars, Wells lumps Winston Churchill in with those still trapped in this phase of development. I wonder if and to what extent Wells revised his opinion of Churchill after the Second World War. 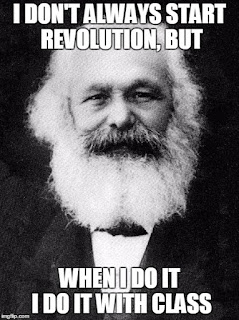 Wells also didn't like Karl Marx very much. My impression is that he saw Marx coming at a similar problem to him, but in an overly simplistic fashion. He claimed Marx had a "plausible, mystical and dangerous idea of reconstituting the world on a basis of mere resentment and destruction: the Class War. Overthrow the 'Capitalist System' (which was never a system) was the simple panacea of that stuffy, ego-centred and malicious theorist. [...] Marxism is in no sense creative or curative. Its relation to the inevitable reconstruction of human society which is now in progress, is parasitic" (143). He also claims that Marxism mostly exists to sustain public anger in face of a very complicated problem: "To abandon the Class War theory of revolution is to give up the use of a very sustaining opiate and to face an intricate riddle. For many rough immediate purposes, drugged fighters may do better than clear-headed ones, but not in the long run" (626). Ouch!

Consistent with this, he claims Russia would have had a much better revolution without Karl Marx. It's interesting to see how Wells articulates a different between the kind of revolution he wanted (gradual, scientifically grounded) and the one he thought Marx wanted (rapid, emotionally grounded), especially given how many of Wells's novels feature massive destruction paving the way for a scientific World State. Here, he argues that "A constructive revolution [...] must begin fragmentarily, it must begin here and there, and it will have associated with it a considerable riff-raff of merely eccentric, extravagant, disgruntled and discredited individuals. [...] Revolution begins with the misfits" (627). I guess a sudden catastrophe was okay for utopian fiction, but not reality, and I guess scientific planning was good for the World State but not for the revolution to bring it into being.

If you know anything at all about Wells, you'll know that he very much liked to be right about everything. (I would uncharitably interpret a number of his works of fiction as establishing that he knew more about certain things than other writers.) It's probably no surprise, then, that he turns out to be a total mansplainer; there's a two-page diatribe about how he had better ideas about feminism than the actual lady feminists. He blames women's cultural inferiority on the biological disadvantage they possess as the child-bearers, concluding that there's no way to equalize it "short of the public endowment of motherhood. These things and not any petty political enfranchisement, I reasoned, must surely constitute the real Magna Charta of Women, and I set myself to explain this with the same tactless simplicity and lucidity that had already caused such inconvenience to the politicians of the Labour Party" (406). Yes, I can see how women would have loved you turning up and explaining why they actually didn't need the vote, H. G.

I guess he recognizes that he was tactless, which is nice, but on the next page he makes fun of their modesty and decries their methods, so twenty years on and he still seems to be acting tactless.

Be Back Tomorrow: H. G. Wells on science and education.
Posted by Steve at 8:30 AM