"Nights could be long and sweet": Never Say Never Again 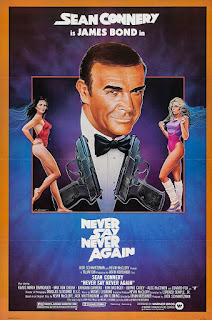 Famously, due to complicated rights things, Thunderball was adapted into a film twice, the second time in 1983. At this point, Roger Moore had appeared in six Bond films, and would go on to appear in one more, but Never Say Never Again brought back Sean Connery for the first time since 1971.

I spent some time puzzling out how this movie fit into continuity. I mean, obviously continuity in Bond is always loose at best, and obviously that's even more true in this film, but I felt like it posited an alternate world where Connery never stopped being Bond, and so by 1983, he was a dinosaur in a world that was leaving him behind, to the extent that the 00 section is shut down for budgetary reasons by M; the film's Bond is clearly an experienced old hand who is out of step with how things are being done these days. This seems to imply to me that some of the old films had happened, so that Bond has an actual history--- but of course Thunderball itself could not have happened, because no one in this movie ever goes, "Hang on, haven't we seen this all before?"

Anyway, it's okay, better than I thought it would be in some parts, worse than Thunderball in others. Fitting in with what had happened in the Bond films over the past decade, it makes things bigger than in the original; instead of confining itself to the Bahamas, the film moves from there to France and then Ethiopia, which doesn't feel grafted on, and gives the movie a nice sense of scope. I liked the setting of the final battle, an ancient Muslim temple in an underwater oasis.

On the other hand, a lot of the changes are clearly mistakes. Changing the casino showdown between Bond and Largo from blackjack to a cheesy world domination computer game that sends electric shocks to the loser... I know it was the 1980s, but surely this played poorly even then? Nice is a great location for some chase scenes, but that it all ends with Fatima Blush (the replacement character for the awesome Fiona Vulpe in the earlier film) trying to get Bond to sign a declaration that she was the best sexual partner he ever had... lol wut? And though the setting of the final battle is great, the whole thing feels oddly anticlimactic, maybe just because of the nature of underwater fights.

On the whole, it's clear the screenwriters consistently looked at the script for the original film and asked, "How can we do this again, but bigger and more?" I like the increased scope, but a lot of the changes are just answers in search of a problem that doesn't exist; the original isn't a top-tier Bond film, but it was fine as is. 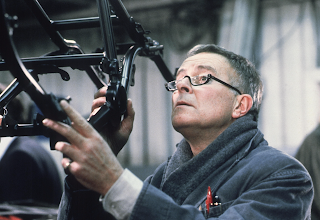