"drench your skin in lover's rosy stain": A View to a Kill 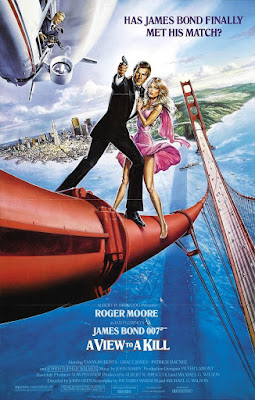 Every Bond film I've watched thus far has been at least loosely based on its namesake, but that streak has been broken with A View to a Kill. The short story "From a View to a Kill," collected in For Your Eyes Only, is about Bond investigating the death of a NATO motorcycle courier in West Germany, and uncovering a secret Soviet installation. The film is about Bond investigating why British microchips are being acquired by Soviet hands, and uncovering a dastardly plot to destroy Silicon Valley. I mean, neither Moonraker nor For Your Eyes Only owed a lot to its prose source, but A View to a Kill doesn't have a single scene inspired by its as far as I noticed. (Well, I guess both have scenes in Paris.)


This was Roger Moore's last film as James Bond, but even if you didn't know that (I checked after it was over), the whole thing seems very tired, a marked contrast to the energetic For Your Eyes Only. The love scenes are as nonsensical as ever, and the fights completely lack any kind of zip or energy. Like most Roger Moore films, this features multiple doofy car chases, but without the sublimity that made the opening one from For Your Eyes Only so good. I couldn't put my finger on it, but the comedy chase that opens this one (where Bond's car keeps getting bits cut off) is stupid whereas the junky car chase in For Your Eyes Only is genius. And then there's this weird car chase where Bond steals a firetruck and comedy American policemen-- a strange staple of the Moore films-- come after him in scenes that belong in The Blues Brothers, except that they're not funny.


The thing that really sinks Roger Moore's Bond in this film isn't that he's too old to do the action or love scenes, it's that he seems to have lost all his charm. When Bond infiltrates the enemy as a socialite, he should be suave and charming, and make his enemies like him. Instead he just comes across as a smug asshole, and you have to wonder why anyone puts up with him, or why he expects this plan to work. 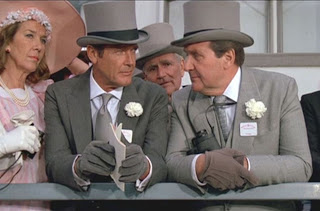