On the Road Again?: The Mollmanns and the National Parks 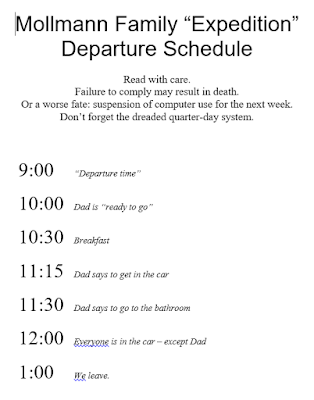 When you're a Mollmann, everything is hard work-- especially relaxation.

I was reminded of his recently by finding a departure "schedule" for a family trip from back when I was in high school. the purpose of the schedule is to make fun of my father's propensity for declaring "it's time to go" but then being the last one ready to go.

The real grueling schedule, however, was the trips themselves. Though we occasionally did relaxing beach vacations, the true Mollmann vacation was the national park road trip, where we would try to hit up as many parks as we could in a few weeks. Mom, I think, would do most of the plotting, working out a schedule and making reservations. the last one I ever went on was in 2006, which was during my LiveJournal Era, which means I am able to reconsruct a pretty detailed blow-by-blow account of it. 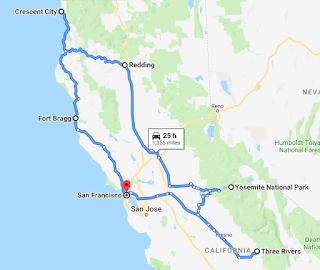 We landed in San Francisco, drove south to Sequoia National Park, then north to Yosemite National Park, Mount Lassen Volcanic National Park, hitting our northernmost at Crescent City, and then turned south to Fort Bragg, flying back out of San Francisco once more. Using Google Maps to estimate, that's a least 1,355 in 11 days, or 25 hours of driving. that's a little over two hours of driving per day, but of course there were days we did no driving, so there were days we did a lot of driving. (Of course, this trip doesn't hold a candle to the legendary 24-hour-with-no-overnight-stops drive from Cincinnati to Colorado.)

This could be pretty taxing on our family togetherness; I remember one trip where we arrived at a hotel and my father got out of the car and crossed the street and stood by himself over there just to get away from us all for a while. We were pretty annoying kids, even (especially?) a he ages of 15, 19, and 21. 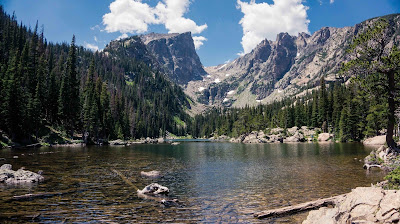 The upshot of this, though, was that I got to go to a lot of national parks and see a lot of amazing things. We might have spent a lot of time in the car (Dad was forever telling us to put our books down and look out the window!), but we also spent a lot of time hiking in some of the most gorgeous places on Earth. I liked Rocky Mountain National Park so much that's where I insisted Hayley and I honeymoon, and I would definitely class it in my top five favorite places I've ever been. Being on top of Sentinel Dome during sunset in Yosemite is probably another.

Across all our trips we racked up a ton of parks; I didn't quite realize how many until I took a Geology of U.S. National Parks class my freshman year of college. A the beginning of each new park, the professor would ask everyone who'd ever been to that park to stand (it was a big lecture class, 100+ students). A couple years later I ran into a girl who said she recognized me from that class. "I sat behind you," she said, "and you stood up every time." I don't know if it was quite every time, but it was frequently. At a quick count, I've been to 21 of the 61 national parks.

Now that I make that count, it doesn't feel like enough. It's only one third! I made a map; there are so many big ones I still haven't been to, the most significant being Yellowstone. (I have been to eight of the top ten by annual visitors; the other one I'm missing from that list is Grand Teton.)

I haven't been to any of the three here in Florida; gotta get on that. It's a mere 876 miles (15 hours) round trip by car (plus a two-hour ferry ride). A good starter road trip for our son?