April 2382–August 2383
The original run of four Typhon Pact novels wasn't one story, but four standalone ones with a common framework, like the Deep Space Nine relaunch's Worlds of... miniseries. One of the interesting things about Plagues of Night is that it takes most of the previous Typhon Pact novels inside itself. It begins just after Rough Beasts of Empire ends; its opening chapters overlap with the opening chapters of Zero Sum Game, showing the theft from Utopia Planitia from a different perspective; later, we see Bashir and Sarina debriefed following ZSG's events; we also get some context for the Tholian machinations in Paths of Disharmony. On the other hand, if Seize the Fire was mentioned, I missed it. (Oh, what a shame.) The first two-thirds of the novel span fourteen months.

These fourteen months make Plagues of Night very much a novel of set-up, especially for the traditional protagonist characters, who we just see snippets of until the final third or so. We get glimpses of Sisko captaining the Robinson, the Enterprise battling Tzenkethi privateers, and updates for a number of long-unseen characters on Deep Space 9 (plus introductions to new ones). These characters don't really drive any kind of plot, except on a personal level. The plot drivers are all at the galactic political level, with characters like Praetor Gell Kamemor and President Nan Bacco making the choices that shape the story. All of this is clearly to set up the final third of the novel, which where a plan concocted by Romulan dissidents and Tzenkethi comes to fruition in the Gamma Quadrant. It's a plan that affects the Enterprise, the Robinson, and Deep Space 9. This part of the novel is suspenseful, as the reader can feel something building, but is uncertain as to exactly what. The cliffhanger, even though I was long spoiled on it, was still impressive and epic.

This book also is more interesting than the previous Typhon Pact novels because it explores them as a pact; there's much more of the consequences of the alliance than in the four standalone novels, which honestly often didn't do much with the pact itself despite the subtitle.

You might think this would make Plagues of Night a novel of two halves, but I surprised myself by liking the set-up. I think it's down to David George's trademark focus on character, and because you can get a sense that something is happening, even if you're not entirely sure what. Some parts of the book I'm a little uncertain what they added (the Enterprise crew pretending to be a freighter), but it's got a lot of good scenes that carry you along: Martok's arrival at the summit of Khitomer Accord and Typhon Pact powers is delightful, for example, and I really liked the scenes between Captains Ro and Picard. It's not a fast novel, but it is one that keeps you reading. It feels much more well-shaped than Rough Beasts of Empire, with its meandering plots.

I objected to a lot of what happened in Rough Beasts on the basis of character implausibility. It's interesting how Plagues of Night kind of rectifies some of this. I still don't think Sisko running away from Kasidy without consulting her makes any sense, but Plagues wisely spends its time exploring the after-effects rather than the causes of these events. This material convinces me in a way that the events it follows from did not. I don't buy that Sisko would leave Kasidy, but if he did, this is how it would play out afterwards. The novel does still lean too much on unseen events; the attempted kidnap of Rebecca isn't very successful as an explanation for some of the Siskos' emotional issues when we haven't actually seen it. And I'm still totally unconvinced by everything that involves Kira as a vedek.

But as I alluded to above, this novel ends on a cliffhanger, and it feels like one of those duologies that's one story in two parts, rather than two linked stories. So my complete reaction to what happens here will have to wait until the story is complete. But The Struggle Within aside, this is the best Typhon Pact story so far, for its continued suspense, and for its fuller exploration of the politics, and for its more convincing character work. 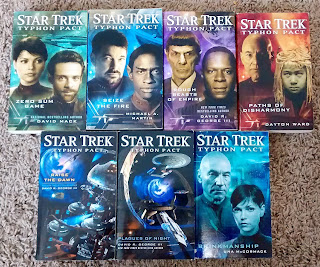