Star Trek: The Next Generation: Indistinguishable from Magic
by David A. McIntee

Stardate 60074.2-60214.1 (early 2383)
This is the first novel branded "The Next Generation" that I've reached in my marathon, but though it might be so de jure it has much less claim to that label de facto than several other novels I've read that don't have "The Next Generation" printed on the title page. Events begin on the Enterprise-E with the whole Destiny-era gang-- Picard, Worf, Choudhury, La Forge-- but soon La Forge has joined the crew of the USS Challenger on detachment.

Instead of being a TNG installment, the book feels like the pilot for a slightly retooled S.C.E./Corps of Engineers series (with the exception of how it ties up; I'll get to that later). Scotty, still heading the Starfleet Corps of Engineers, captains the USS Challenger, a Galaxy-class testbed for experimental technologies. The ship is crewed by a bevy of familiar engineers from across Star Trek: in addition to Scotty and La Forge, Reg Barclay and Dr. Leah Brahms are the major ones, plus Nog is chief of security. On top of that, you have some familiar guest characters like Berlinghoff Rasmussen and Guinan, and some new characters, including the Challenger's delightful chief engineer and a very enthusiastic Klingon woman pilot. It reminds one of set-ups for new ongoing series like New Frontier or Titan. It's the kind of thing that could be overly fannish, but McIntee keeps it on the successful side. We would never ever see Barclay, Nog, and Brahms work together on screen, but this is what tie-in fiction is for.

The main plot of the novel begins with the Challenger investigating the mysterious reappearance of the NX-07 Intrepid, fresh out of the era of Enterprise, but with a dead crew far from its last known position. This part has a pleasing technical mystery to it: of course, a lot of it is bafflegab, but as in some Golden Age sf, it's fun to watch a team of highly competent professionals do their thing. Berlinghoff Rasmussen, as a native of the 22nd century himself, is brought on as a consultant, but soon things are disrupted by an it's-so-crazy-it-just-might-work plan from an old villain, and La Forge and Barclay have to save the day while prisoners. It's good, if generic Star Trek fun. Like I said, this is what tie-in fiction is for. Then, as the Challenger investigates the phenomenon that caused the displacement of Intrepid, things get bigger and crazier, and unfortunately, somewhat rushed. There are a lot of cool concepts in the second half of the novel, but I often felt like the characters were rocketing through them. (Though what happens to Scotty, plus his memorial service, are quite nice.)

Characters rocketing through things is actually the big fault of the novel. La Forge goes through a whole lot here, and it's curiously understated; we get very little sense of how La Forge feels about this all, what's at stake for him personally and emotionally. La Forge becomes captain of the Challenger halfway through, in a nice piece of continuity with Voyager's "Timeless," but surprisingly there's no coherent subplot about him adjusting to command or what captaincy means to him or how he has to act differently than he was. Similarly, he gets together with Leah Brahms, but I'm not really sure why: it's like they see each other again, and huzzah, they're back together.

What comes after the climax is disappointing. Indistinguishable from Magic is not the pilot for a new S.C.E. spin-off, because the book ends with the destruction of the Challenger and the return of La Forge to his old post on the Enterprise. It's a little annoying, because it seals that the events of this novel don't actually matter to La Forge. He gets two months of captaincy, and then he's back to doing the same thing he's been doing for the past eighteen years. Sure, he's "captain of engineering" now, but he doesn't really seem happy or sad or anything to lose a ship so quickly. The end kind of confirms all these characters will get rolled back to where they were; Barclay will go to the Voyager fleet again, and I'm very willing to predict Nog will be back on Deep Space 9 (if we ever get to see the station again, that is).

I kind of liked this book, but in the end, it just feels hollow. 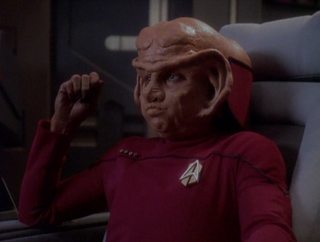