2381-82 (Stardate 58188.4 (a Tuesday) to 59155.0 (a Friday)), plus myriad other time periods too copious to mention
These days, the way New Frontier was populated with popular Next Generation guest stars in order to establish its legitimacy as a literary spin-off of the screen franchise seems positively naïve: here we have a novel based around two characters whose total screentime can be collected in a four-minute video. I have to admit that I was a bit skeptical going in, but Department of Temporal Investigations turned out to be a fun premise. The joy of it is in the way that Bennett approaches the DTI as a long-running cop show, about well-meaning but tired civil servants just trying to do their best in a universe that doesn't appreciate them.

It's the small details that make the book work: I liked the joke about how DTI agents are tired of time jokes (the one in the opening chapter was delightful); I liked how uptime temporal agents are higher authorities, basically like when the FBI turns up in a police procedural; I liked the idea that after major disasters, the DTI has more work both because of people trying to change history and because of tourists/researchers coming back to see it; I liked the little digest history of the DTI, where when Starfleet gets time travel, they're all "neat! let's explore time too! what could go wrong!" and the DTI is formed because the government is like, "You keep almost wiping out recorded history. STOP IT." I liked the portrayal of Dulmur and Lucsly. Bennett stated his intention was to turn their very colorlessness into an asset, and the book succeeded in this. I liked both of their fervent devotion to the job, and the sly humor of Lucsly, especially his final line in the penultimate chapter.

The book's strongest parts are its beginning and its ending. The opening chapter, featuring an agent who's snapped after a rough mission in the wake of Star Trek: Destiny is good fun; I loved both his rant ("Kill her, don't kill her, none of this makes a difference to the multiverse.") and Lucsly's putdown of it ("stop abusing temporal physics as an excuse to dodge responsibility for your own choices!"). The whole first chapter leads like the pilot episode of DTI tv show, because it goes straight from this (obviously the opening teaser) into a quick mystery about passenger transport that traveled through time, which has tv-style cutting between suspect interrogations. The whole thing culminates in the induction of a new member of the DTI, a potential viewpoint character. It was fun and entertaining.

Unfortunately, the whole book is not like that. It soon settles into a monotonous format of alternating present-day cases of the DTI in 2381 to 2382 with flashbacks that slowly ascend from 2364 to 2378. None of these cases are as good as the first one, which could stand on its own as a little story-- most of the flashback cases follow the format of "DTI turns up the aftereffects of a Next Generation episode; exposition is delivered to massage the details into the novel's Unified Theory of Star Trek Time Travel." It's definitely small world, and none of them are as zippily written as the introduction, sometimes getting quite belabored in their explaining of temporal theory, Star Trek continuity, or both. It's formulaic and there's not enough at stake in most of them to be interesting. Some are still entertaining, though (I liked the bit where Janeway escapes temporal justice and Lucsly quits the force), and soon a narrative begins to emerge, of the twenty-fourth century's participation in the Temporal Cold War from Enterprise.

I'm not entirely sure what I think about the novel's engagement with this. It works okay on the novel's own terms; the book lays clues about the identity of Enterprise's so called "Future Guy" in each of the flashbacks, and eventually that information pays off. But if you handed a fervent Enterprise fan this book so that they could finally get the answers Enterprise itself never yielded, I don't think they'd be satisfied, as there's absolutely no hints from Enterprise that really pay off here. The true identity and motive of "Future Guy" pay off Watching the Clock itself, not Enterprise. Plus, of course, no Enterprise characters are present to have anything to do with the comeuppance of their long-time nemesis. Maybe they should have plucked Archer out of time to punch him on the jaw or something? But it's as if a long-running mystery in the Father Brown stories was unexpectedly resolved in a Sherlock Holmes story. It jars narratively.

The ending is the other good part; the DTI, some Next Generation characters, the 29th-century Starfleet guys from "Relativity," the 31st-century temporal agents from Enterprise, and many more characters end up in snarled, tangled, temporal mess that was just completely ridiculous in a good way, taking all the goofy possibilities of Star Trek time travel and piling them atop each other to joyous excess. I didn't follow any of it (and I usually have a good head for these things), but I loved reading it. It's like Steven Moffat turned up to eleven.

Also the viewpoint newbie character gets shunted off into her own side story, which completely failed to engage me. The Axis of Time seems like a potentially interesting Big Dumb Object, but the story told with it was completely dull; I couldn't bring myself to care about cross-time artifact smuggling, or super sexy mind control space ladies.

So, a set-up that's more fun in theory than practice, but hopefully that bodes well for future installments of DTI-- I know the third installment onward are novellas, which seems like it would lend itself toward what I liked about the first chapter. 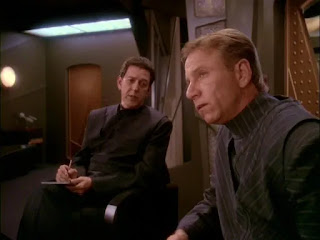