2377-81
"Mirror, Mirror" is good fun, but I never really warmed to the Mirror Universe episodes of Deep Space Nine. "Crossover" is decent and I will admit to enjoying the inanity of "The Emperor's New Cloak," but outside of that, they tend to range from dull to inexplicable (i.e., "Resurrection"). Deep Space Nine shifted too far from the core premise of the Mirror Universe, I think, which is pretty simple: Our Heroes Are Evil. "Crossover" got this but it overcomplicated things to get there, with an elaborate backstory about the fallen Terran Empire and the Klingon/Cardassian Alliance, blah blah blah. Who cares? I just want to see women with bare midriffs, Vulcans with beards, and liberal use of the agony booth. Diane Duane got this when she wrote Dark Mirror: it's deliciously, delightfully dark. But the set-up of the DS9 MU episodes positions most of Our Heroes as good guys for some reason? And makes the Klingons and Cardassians-- the "bad guys" of our universe-- the bad guys there too! Like, why? And then the whole century of Actual History kind of misses the point. I don't need a convincing explanation, I need Evil Federation.

The Deep Space Nine Mirror Universe thus falls into an uncanny valley: not ridiculous enough to enjoy, but too ridiculous to take seriously. On screen, it kind of muddles through thanks to the fact that the actors are clearly enjoying playing these broad versions of themselves, but lacking a Mirror Universe where Our Heroes Are Evil, what we mostly seem to actually get is Our Heroes Are Dumb Thugs.

All of this is to say that I have been tepid on prose takes on the DS9 MU, and initially planned to not read Rise Like Lions at all even though I liked David Mack's previous Mirror Universe novel, The Sorrows of Empire, okay, but then I found out it tied into the Destiny Era novels somehow, and so here I am. This novel picks up from, well, everything: all the 24th-century stories in the three S&S Mirror Universe anthologies are brought together, along with the masterplan introduced in Sorrows of Empire. So we have mirror O'Brien, mirror Keiko, mirror Dukat, mirror Damar, mirror Worf, mirror Picard, mirror Troi, mirror Klag, mirror Kes, mirror Neelix (because you demanded it!), mirror Calhoun, mirror Jellico, and so many more, surely a cast of thousands if there ever was one.

The problem is that I just don't care about any of them. Minus the liveliness of an actor's performance, most of them are just selfish people doing dumb things. The ones who are supposed to have ruled galactic empires do not convince, coming across as squabbling, short-sighted idiots. The book has so many characters that none of them have any kind of dramatic arc; the book ping-pongs between all these different people, giving each a chapter every now and again, but like the other Star Trek historical epics I've read recently, it often seems like the focus is misplaced. Like, Damar commits genocide against the Vulcans and this is relayed to us in introspective narration about past events! Meanwhile I'm reading about yet another argument between Klingons.

Once you get the lay of the book, it all unfolds pretty predictably: the Klingons and the Cardassians squabble among themselves, and the new Memory Omega-backed Terran Resistance picks up the pieces. (Memory Omega's super-tech removes a lot of suspense.) I found there weren't really any surprises, and there wasn't really any reason to care about these people. How awful people learn to run a democratic society is a potentially interesting question, but all that happens off-stage too.

Somehow, I guess, this will end up factoring into the Prime Universe, but I can't say I'm excited to find out how. 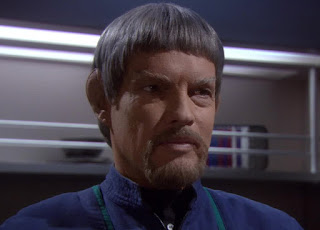