Dating superhero comics is a bit of a mug's game. They're set at the time of publication (usually), but Superman has been published for seventy years and he's certainly not seventy years old. That's because there's a "sliding timeline" involved so that the heroes have always emerged x number of years before the present. (A lot of people disagree on what x is, and DC recently redefined it in any case.) Plus, some aspects of history slide-- Superman no longer hung out during World War II-- but others do not-- the Sandman is pretty firmly dated to 1938. Also there are retro stories.

Curious about what order the DC comics I read actually take place in, I put this together. This uses absolute dates, but I'm agnostic on whether or not I believe in them; I wanted this for the order of events more than anything else. Did Orion and Kalibak bust up Metropolis before or after Green Lantern and Green Arrow discovered America? What was Captain Comet doing in outer space when Connor Hawke was visiting Japan? Now I can know!

Note that this timeline borrows extensively from The Unauthorized Chronology of the DC Universe and the DC Comics Trade Paperback Timeline, though I don't always agree with either fellow. It will include some "New 52" titles, but only those for series that did not undergo substantial reboots (i.e., Batman and Green Lantern). It only includes Vertigo titles with substantial connections to the main DC universe, so The Sandman and Sandman Mystery Theatre are in, but Lucifer is not. All Vertigo universe titles are on their own page; Elseworlds DC titles follow at the end. 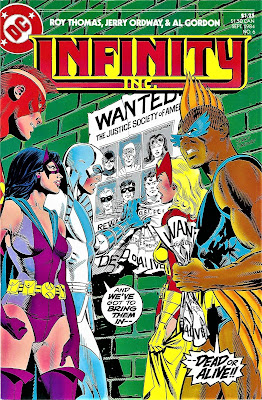 It seems a little unfair to omit the DC titles that don't fit into this timeline, so here they are, ordered by publication date. Ones that share continuities are grouped together: